A Thai bomb squad inspects the site of a deadly bombing from the night before outside  a hotel, in the southern province of Pattani on Aug. 24, 2016. More recently on May 9, more than 60 people were injured by a car bomb outside a supermarket in the same province. (Photo by Tuwaedaniya Meringing/AFP)

They are accused of being behind a recent bomb attack on a Big C supermarket, a major retail outlet that services the three provinces of Pattani, Yala and Narathiwat, where over 80 percent of residents are Muslims of Malay ethnicity. The bomb attack injured 61 people.

So far only one of the 11 has been arrested. Suhaimee Sama-ae was detained last week by the military under an emergency law that permits detention without charges.

The region has been hit by a separatist insurgency that has claimed nearly 7,000 lives since January 2004, when the conflict resurfaced after nearly a decade of relative calm in the contested region.

Pattani Police Chief, Pol. Major-General Piyawat Chalermsri, told reporters on May 15 that the 11 suspects allegedly stole a pickup truck, murdering its owner and rigging it with explosives before setting it off near the entrance to a Big C supercenter on May 9. The warrants were in addition to one already issued for a 25-year-old suspect, Makoseng Ma-ae.

The Big C attack required serious planning. A vehicle had to be acquired and used before it was reported stolen. The bomb was most likely already assembled and ready to be picked up. It was not clear if the two men who drove the stolen pickup truck to the Big C also murdered the owner. And then there were the two getaway motorbikes waiting near the main road.

The Thai government has wasted no time in blaming the Barisan Revolusi Nasional (BRN), a long-standing separatist movement that controls virtually all the combatants.

Thai security officials said the tactics and the bomb-making technique was that of the BRN. Observers said if the Big C attack, which had deliberately targeted innocent residents, was indeed sanctioned by the BRN then greater instability and more deadly violence could be expected. 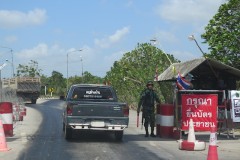 However, Thai officials are not ruling out the possibility that the unit acted on their own without the consent of higher ups. They said that it was very unusual for the BRN to target a location frequented by local Muslims, the people who they are supposed to be liberating. They added that the attackers made all sorts of mistakes possibly stemming from miscommunication.

One Thai military intelligence officer took the analysis one step further and suggested that the BRN might be experiencing a split: between more hard-line combatants who believe they can fight their way to independence and those who support negotiations with the Thai government but with foreign observers.

The BRN Information Department issued a statement in April saying their group is willing to negotiate but talks must be consistent with international norms. The group wants western governments to observe the dialogue process, sources in the movement said.

BRN operatives on the ground often describe their movement as one whose chain of command is very fluid and combat decisions are made at the unit level.

Some Thai officials think the Big C attack was carried out by a pro-government death squad in revenge for a spike in violence during April. These vigilante outfits have occasionally taken matters into their own hands by carrying out machine gun attacks on teashops full of Malay Muslim villagers.

The spike in violence in April was in retaliation for the extra judicial killings of two suspected militants on March 29.

BRN cell members from Pattani, in an interview shortly after the Big C car bomb, said they do not believe that militants in their network could carry out an attack directly targeting civilians, especially if the targets include local Malay Muslims.

The BRN's leadership and its information department remained tight-lipped in spite of a growing call from local civil society organizations for them to confirm or deny the allegations.

Human Rights Watch accused the BRN of repeatedly violating the rules of war and international norms and suggested that the group should be designated a terrorist organization.

Prime Minister Prayuth Chan-ocha dismissed the suggestion and insisted Thai law could handle the situation. Security officials believe that designating the BRN a terrorist organization would not only tie their hands in political terms but also invited unwanted interference from the international community because terrorism is theoretically everybody's business.