Protesters use a tractor to breach a police barricade near Nakon Sawan on Monday (photo by ucanews.com)

A Thai court on Monday issued an arrest warrant for protest leader Suthep Thaugsuban for "insurrection" over his attempt to topple the government, police said.

The warrant was issued "for the charge of insurrection which shall be punished with death or life imprisonment", said Chayut Thanataweerat, deputy metropolitan commander, in a televised statement.

While the charge is serious the death penalty is rarely carried out in Thailand.

Last week a court issued a warrant for Suthep's arrest for orchestrating the occupation of government ministries.

He already faces murder charges linked to his role in ordering a deadly crackdown on protesters in 2010, when he was deputy prime minister for the then-ruling Democrat Party administration. 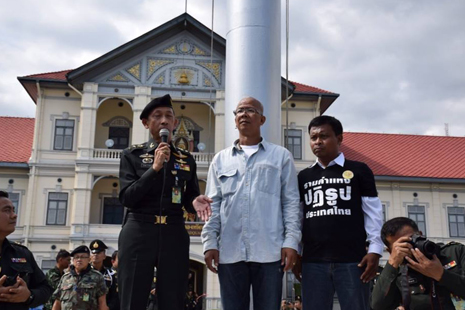 But the firebrand protest leader has remained defiant despite his mounting legal problems, vowing to topple the government of Prime Minister Yingluck Shinawatra.

Thousands of his supporters clashed again on Monday as they tried to break through police lines and occupy key government buildings in the Thai capital.

Thai police fired rubber bullets into Molotov cocktail-wielding crowds of protesters, hitting at least one person and signaling an escalation in the violence that has accompanied weeks of street demonstrations.

A paramedic close to the barricade in front of Government House, the epicenter of the protests, told ucanews.com that the man had been conscious upon arrival at the ambulance but had a deep bullet wound to the rib cage.

She said she was unsure whether a rubber bullet could have caused such an injury, although unlike the mass protests in 2010 in Bangkok, there have been no reports of police using live ammunition.

The deaths of four protesters over the past week have been attributed to battles between those who support Yingluck and those who want her removed.

Reports on Thai media this evening claimed Yingluck, the sister of exiled former Prime Minister Thaksin Shinawatra, had agreed to step down and dissolve the House, although this has not been confirmed. AFP claimed the prime minister remained defiant in the face of protesters’ demands.

The demonstrations had for most of today appeared to be in something of a stalemate, with riot police standing firm behind barricades and protesters lobbing bottles and firing slingshots.

The announcement of a temporary truce this afternoon triggered a lull in the violence around the main Government House barricade, although police continued to fire tear gas at protesters at another barricade around 200 metres down the road.

At around 6.30pm, with darkness setting in, a loader truck arrived at the second barricade and bulldozed the concrete wall. Police responded with a sustained volley of tear gas and water cannon. The breach in the barrier will further alarm security forces who had until today largely remained restrained.

Protesters appear to be making a concerted push to take Government House and force the ruling Pheu Thai Party out of power before the 86th birthday celebration of the revered King Bhumibol Adulyadej on December 5. Yet whether there are orders from protest leaders to step back, or to stay put through December 5, remains unclear.

“We don’t know what will happen on the 5th,” one protester said. “Maybe we will stop. Maybe we will continue after the 5th. We are not sure.”

The apparent lack of a coherent strategy for both the protests and the aftermath, in the event Yingluck does step down, is cause for concern among Thailand observers.

Suthep Thaugsuban has called for the formation of a People’s Assembly to appoint the next prime minister, although details on how it will be formed, and who will comprise its members, have been conspicuously absent.

The Pheu Thai Party won a landslide victory in the 2011 elections, pushing the Democrats, who came to power in a 2006 coup that ousted Thaksin from office.

The protesters accuse Yingluck of being a lackey of Thaksin, who is known to wield heavy influence over Pheu Thai policy from afar.