Friends of land rights activist Den Kamlae show pictures of the investigation into his disappearance at Chulalongkorn University in Bangkok on May 10. Den's disappearance joins at least 80 other open cases of enforced disappearance in Thailand, according to the United Nations. (Photo by AFP)

Thailand struggled to defend its human rights record as scores of countries raised concern at the U.N. Human Rights Council May 11 over its treatment of critics, abuse of military courts, crackdowns on free expression and more.

The review, which took place at U.N. headquarters in Geneva, is Thailand's first since the May 2014 military coup.

The protection of human rights "have seriously deteriorated since the 2014 military coup," said the New Zealand representative. "We are strongly concerned about the protection and promotion of civil rights."

At least a dozen countries including Finland, Greece and the Netherlands echoed those concerns, calling on Thailand to abolish its practice of harassing, arresting and torturing government critics and rampant use of military courts for prosecuting civilians. 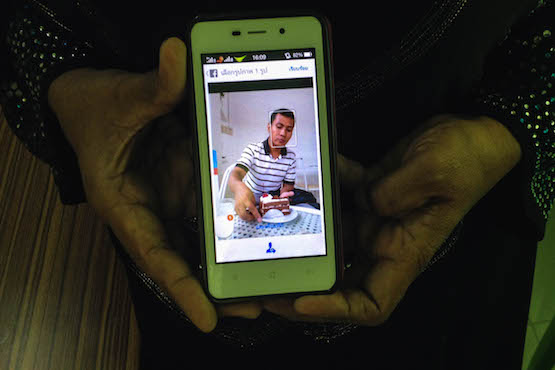 "We are deeply concerned about restrictions to the rights of freedom of expression, association and assembly," said the representative from Germany.

Chief among the recommendations offered by the 105 countries that requested to speak was a repeal of the death penalty, which remains on the books and is a sentence faced by 649 prisoners, though no executions have been carried out since 2009.

Several countries including the United States and Norway took aim at Thailand's highly controversial lese majeste laws, urging either an overhaul or a full repeal. Thailand also drew criticism for its treatment of refugees and asylum seekers. More than 100 Uyghur asylum seekers were forcibly deported to almost certain abuse in China last year, while hundreds of Rohingya, Pakistani Christian and other asylum seekers languish in immigration detention centers.

Addressing the criticisms, representatives of the Thai government took pains to defend its rights record and explain the "limitations" to freedom necessary to ensure social stability.

"The government has full respect for these rights, but given the political climate which country has faced over past few years … such limitations are only in place to prevent further divisiveness," said a Thai government representative. "The government has no intention to impose restrictions to ordinary citizens [only for those] who intend to stir up violence."

Since the coup, more than 500 people have been arrested on freedom of expression-related allegations and 150 civilians tried in military courts as of December 2015, according to legal advocacy group iLaw.