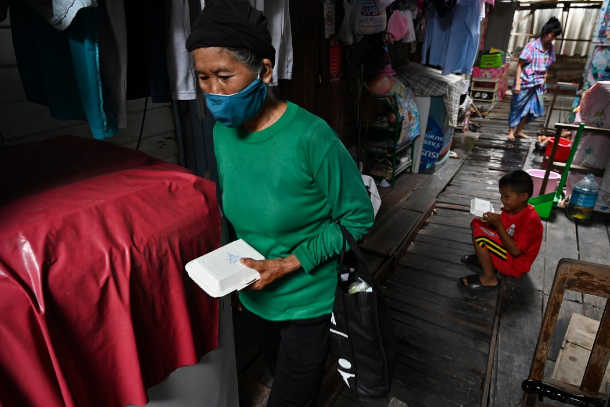 Residents walk along a passageway holding food donations handed out during the coronavirus pandemic in a low-income neighborhood in Bangkok. A lockdown and an economic slump have been blamed for a sharp rise in domestic violence in Thailand over the last few months. (Photo: Romeo/Gacad/AFP)

Recorded cases of domestic violence have nearly doubled across Thailand in the wake of a nationwide lockdown and an economic downturn due to the Covid-19 pandemic, the country’s Social Development and Human Security Ministry says.

Between the beginning of February and the end of April, nearly 500 incidents of domestic abuse and violence were recorded on the ministry’s hotlines.

The rate is considerably higher than during the same period last year, and the actual rate of domestic violence is likely to be far higher than the official tally because many cases go unreported.

“Women and children were usually the victims of violence and most complaints stemmed from incidents of assault or arguments related to extramarital affairs and jealousy,” a Thai newspaper reported, citing officials.

Mental stress exacerbated by the economic slump and stay-at home rules have been highlighted as the main causes behind the worsening domestic abuse.

Over the past two months an estimated seven million Thais have lost their jobs. Mass unemployment has pushed millions of families to the edge of dire poverty and even starvation in a nation with few social security benefits for the poor.

As a result, social workers say, substance abuse and stress levels have increased, especially among low-income earners whose situation was already dire before the pandemic.

Lockdowns have also forced people into their homes with nothing to do for weeks on end, which has caused further friction in more families. Some people, especially men, may take their anger and frustration out on their wives and children, social workers say.

However, experts have cautioned against singling out the pandemic for blame when it comes to rampant domestic abuse in Thailand. Already last year several experts were raising the alarm about the high rate of domestic violence, which often involved homicide.

In just the first three weeks of January last year, 33 Thais died in incidents related to domestic violence, compared to 10 in January 2018, according to the Women and Men Progressive Movement Foundation.

“The current situation is like a [domestic] war in which murder can occur easily,” he said. “Death is the result, but the government is too passive to act.”

In addition to domestic violence, sexual abuse, including rape, is also widespread.

“The root cause of rape is gender inequality in society,” Chadej said, adding that much stricter law enforcement measures were needed to bring alleged rapists and sexual abusers to justice.

In one egregious recent case, a 14-year-old girl was allegedly molested and raped numerous times at her school in a provincial town by five teachers and two students over a one-year period.

The perpetrators reportedly filmed some of the sex acts, warning the girl that they would release the videos if she told anyone about the abuse.

The girl’s grandmother reported the alleged crimes to police early this month after learning about them.

Police have pressed charges against the seven suspects, all of whom have denied the allegations and remain free on bail.