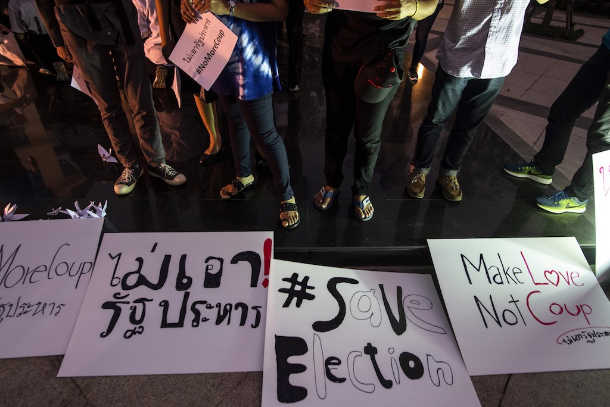 Pro-democracy supporters display anti-coup placards during a protest at Thammasat University in Bangkok on Feb. 11. The military government continues to limit freedom of expression in the run-up to a general election on March 24. (Photo by Jewel Samad/AFP)

Thailand’s broadcasting watchdog has been criticized for taking a TV station off the air in the run-up to a general election due on March 24.

The National Broadcasting and Telecommunications Commission (NBTC) on Feb. 12 announced the suspension of Voice TV for 15 days, starting from Feb. 13, after accusing the station of causing public confusion, inciting conflict in society and threatening national security because it provided airtime to candidates critical of Thailand’s military government and broadcast criticisms of the government’s handling of the upcoming election and the economy.

“The suspension of Voice TV underlines the message that criticizing Thailand’s military government prior to the elections is forbidden,” said Brad Adams, Asia director of Human Rights Watch (HRW). “Thailand’s generals are showing they don’t intend to ease their heavy-handed rule over the country to ensure a fair vote.”

Voice TV has been targeted for censorship and punishment more than any other TV station since the May 2014 military coup that brought the National Council for Peace and Order (NCPO) junta to power, HRW reported on its website.

Authorities suspended the station for 26 days in 2014 and seven days in 2017, while on 17 occasions it has been instructed to remove certain programs.

On Dec. 11, the NCPO lifted its prohibition on public gatherings and political activities, allowing political parties to campaign for parliament. However, it kept in place military orders restricting expression and authorizing criminal prosecution for speech critical of the junta, its policies and actions, and the monarchy.

NCPO Announcement 97/2014 bans “criticism of the work of the NCPO” and the dissemination of “information that could harm national security, cause confusion, or incite conflict or divisions in the country.” This announcement also compels all news outlets to distribute information issued by the junta.

NCPO Announcement 103/2014 prohibits the propagation of news or the distribution of any publication containing information that the authorities consider “intentionally distorted to cause public misunderstanding that affects national security or public order.”

The NBTC has become the primary censorship tool for the junta, HRW said.

“Thailand’s elections won’t be considered credible if media outlets are gagged and critical commentary about military rule is prohibited,” Adams said. “The government should immediately uphold media freedom by lifting Voice TV’s ban and ending further attempts to silence this and other media outlets critical of the junta.”