Thai scammers cash in on Covid-19 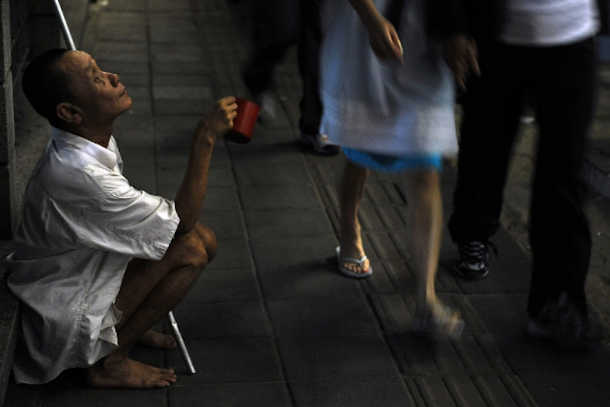 A beggar asks for money in central Bangkok. Several cases have emerged recently of Thais scamming their compatriots for money during the coronavirus crisis. (Photo: AFP)

As the Covid-19 pandemic continues to take its toll on the livelihoods of millions around Thailand, some unscrupulous locals have been seeking to cash in by scamming their good-hearted compatriots.

Several scandals have hit the headlines in the Southeast Asian nation after it was revealed that some people who were soliciting donations online, citing their dire economic circumstances, either lied or even committed serious crimes to gain sympathy.

In one especially egregious case, a 29-year-old woman in Bangkok was arrested last week after she had forced her two-year-old son to drink bleach, according to police.

She then posted images and video clips of the severely ill toddler online, asking people to buy face masks from her so that she could pay for the boy’s medical treatment.

The boy, who has been disabled from birth, has suffered severe intestinal injuries after being forced to drink from a bathroom cleaner and is receiving treatment at a hospital in Bangkok.

“Apparently, the boy swallowed a liquid that burned his lips and damaged his digestive tract,” said Natthaphong Koetiam, a police officer at Thailand’s Crime Suppression Division. “A medical report found the boy is not suffering from a genetic disorder.”

Police say the woman had previously posted pictures of a severely ill four-year-old girl with similar symptoms while soliciting donations for her treatment.

The girl, who had been adopted by the woman, has since died. There have been allegations that the woman may have adopted the girl so as to use her in a ploy to make money by gaining sympathy.

Police are investigating whether the two-year-old boy is her biological son, as the woman claims, but it seems likely that he, too, was adopted by the woman for the purpose of being used in a fraud.

According to police, the woman received some 20 million baht (US$626,000) to several bank accounts from around 3,000 concerned locals who were unaware that she had poisoned the children.

The woman, who has a criminal record for fraud, denies the charges, saying both children had suffered severe allergic reactions from seafood.

The revelations have caused widespread outrage in Thailand, where the woman has been dubbed “bleach mum.” She is facing a variety of charges including attempted murder and fraud.

Numerous commenters online have slammed the woman. “Such callous treatment of little ones for money must be rewarded by a life in prison at least. Pure evil!” one commenter noted.

The case comes on the heels of several other alleged instances of fraud for sympathy.

In one highly publicized case, an elderly taxi driver in Bangkok received more than 8 million baht in donations recently from good Samaritans after he told a passenger, who then posted about the man’s plight online, that he was destitute with only 200 baht left.

Numerous Thais sent him money, making the taxi driver wealthy overnight. It soon transpired, however, that the driver, who is 72, had lied about his financial situation.