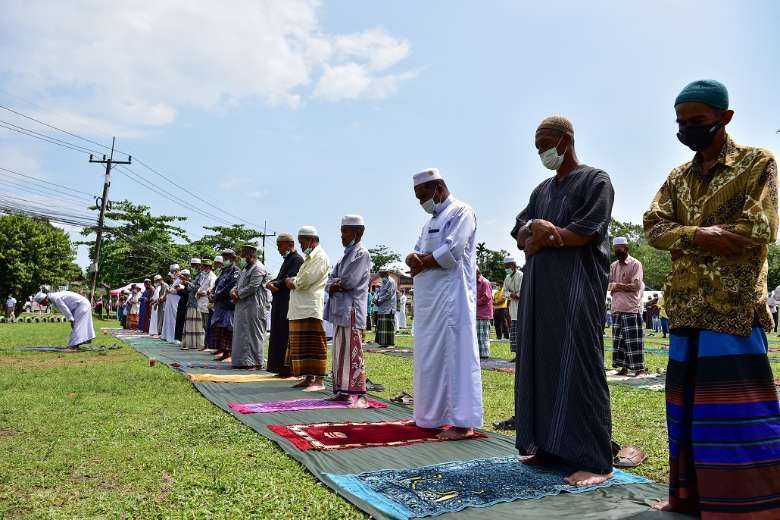 Muslims offer prayers as they gather for an event promoting peace after clashes between Thai rangers and separatists in Ra-ngae district in the southern Thai province of Narathiwat on March 21. (Photo: AFP)

A Thai court has ruled in a controversial decision that its inquest was inconclusive into the death of a Muslim man who died in military custody in Thailand’s restive Muslim-majority region despite lingering fears that the man was tortured to death.

Abdullah Isomuso, who had been accused by security forces of being engaged in insurgent activities in the largely Muslim southern province of Pattani, was found unconscious in his cell after being detained and died in intensive care a few weeks later in August 2019.

His family has alleged that the man died as a result of injuries he suffered while being tortured during interrogation by the Thai military in what has become a high-profile case in Thailand, where the police and military have over the years been credibly accused of using torture techniques on some suspects.

Thai security forces have denied torturing the man and in a new ruling a provincial court in Songkhla, another one of the Muslim-majority provinces in Thailand’s Deep South, has said that while Abdullah died of brain damage resulting from oxygen deprivation, there was insufficient evidence as to whether his death was caused by the actions of any officials.

Many Muslims in Thailand’s southernmost region, where a separatist insurgency has been raging since 2004, have been following the case closely, seeing it as an example of official impunity.

Abdulkohar Awaeputeh, a lawyer who represents the dead man’s relatives in their search for answers and justice, told a local newspaper that the court’s ruling could further undermine trust in the judicial system among many local Muslims.

“I understand that it’s difficult because you have to fight the old system, but at this point I don’t know how to explain it to the family so that they should still believe [in the justice system]. I think they want to know the real cause of death”

“I have been working here for a long time and in my status as a lawyer I want to see change. I use trust in the judicial process. I use the state channels. I want to show that there is a way out,” Abdulkohar said.

“I understand that it’s difficult because you have to fight the old system, but at this point I don’t know how to explain it to the family so that they should still believe [in the justice system]. I think they want to know the real cause of death.”

Rights groups have long accused Thai security forces of employing extrajudicial means such as “systematic torture” of some suspected militants in the restive region where well over 7,000 people have died over the years in violence perpetrated by Islamist militants and security forces.

Amnesty International, for one, has documented numerous cases in which suspected insurgents were allegedly tortured in detention.

“At about 1am I was ordered by the superior officer to get up. This officer punched me in the face, called me a terrorist and broke my national identification card, while another soldier kicked me from behind; there were three soldiers in addition to the superior,” one man told the rights group.

A prominent rights advocate says that the inconclusive inquest into the cause of Abdullah’s death leaves some important questions unanswered.

The court’s inquest, which took two years to conclude, has not provided any answer as to whether he suffered a severe brain injury without external causes, noted Pornpen Khongkachonkiet, director of the Cross-Cultural Foundation, which seeks to foster multiethnic harmony in Thailand.

“Where else can his family seek justice and who is going to take responsibility for the detention of Abdullah by the state which caused his death in a military camp?” she said.