Protesters take part in a demonstration in Bangkok on Nov. 14 after a Thai court ruled that speeches by protest leaders calling for royal reforms amounted to a bid to overthrow the country's monarchy. (Photo: AFP)

A group of ultra-royalists in Thailand have called for Amnesty International to be evicted from the country and banned permanently from operating in it, accusing the prominent rights group of being a threat to national security.

Carrying signs that said “Amnesty get out” in English and “Amnesty don’t poke your nose into Thai matters” in Thai, the four dozen or so protesters, dressed in royal yellow, gathered outside Government House and submitted a letter to Prime Minister Prayut Chan-o-cha demanding that the rights group be expelled, saying it was seeking to undermine the Thai monarchy.

Earlier this week Seksakol Atthawong, an assistant minister at the Prime Minister’s Office, submitted his own letter to Prayut, a former army chief who seized power in a coup in 2014, recommending that an investigation be launched into Amnesty International’s activities.

At issue is a recent statement by Amnesty International’s local chapter criticizing a ruling on Nov. 10 by the Constitutional Court that declared calls by pro-democracy activists for reform of the monarchy to be sedition, thereby effectively equating such calls with treason.

Amnesty International has been campaigning for the rights of student activists who have been calling for democratic reforms in Thailand, including a reform of the monarchy, which is officially portrayed as an inviolate pillar of the nation.

“Hundreds of human rights defenders continue to be detained, indicted and prosecuted for peacefully exercising their human rights including participating in protests for reform,” Amnesty International says on its website regarding Thailand while calling for global actions on behalf of Thai pro-democracy activists.

Several activists have been detained and denied bail repeatedly ahead of their trials on charges of sedition, royal defamation and other crimes, while about 155 predominantly young Thais have been charged with royal defamation, which could see them sentenced to years or even decades in prison.

In a surprise twist, Anon Saennan, a prominent member of the Red-Shirt Villages of Thailand protest group that opposed the military coup, has said the group will join the royalist campaign to drive Amnesty International from Thailand over its support for the jailed activists who called for monarchy reform.

“We’re answering [Seksakol’s] call and asking red-shirt villages across six regions to collect signatures of those who want to see this organization out of the country,” Anon said.

Until recently open calls for a reform of Thailand’s influential monarchy, which is officially held up as a sacred institution, had been unheard-of, not least because a draconian lese majeste law criminalizes even the slightest criticisms of the institution or royals themselves. 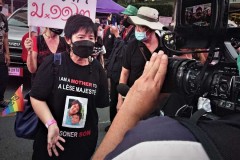 However, during their street protests over the past year young pro-democracy activists have broken a long-standing taboo by calling for constitutional reform of the monarchy, which they declared an opaque and outdated institution.

Such calls have angered ardent royalists who have responded by reporting young activists to police on charges of defaming the monarchy.

The same day that the group of royalists gathered outside Government House, police charged a young actress and pro-democracy activist, Inthira Charoenpura, with sedition over her involvement in a student-led pro-democracy protest where calls were made for monarchy reform in November last year.

Inthira did not address the crowd and only provided food to demonstrators; it was for her presence alone at the protest that she has been indicted, her lawyers said.

With an increasing trend of excessive and unnecessary force being used by police during protests, there are grave concerns for the safety of protesters

Rights groups such as Amnesty International have been warning that Thai authorities are stepping up their campaign of repression against pro-democracy activists by charging them with various crimes, including sedition and royal defamation, both of which carry long prison sentences.

At the same time, key leaders of the movement have been denied bail repeatedly.

“With an increasing trend of excessive and unnecessary force being used by police during protests, there are grave concerns for the safety of protesters.”