Water-splashing incident has highlighted conflicting views of the monarchy 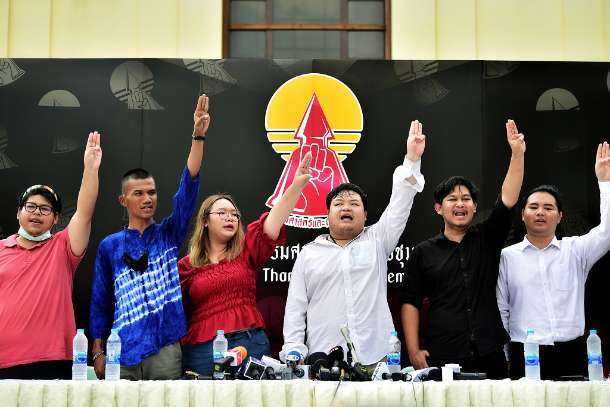 Student leaders from the United Front of Thammasat and Demonstration give the three-fingered 'Hunger Games' salute during a press conference at Thammasat University in Bangkok on Sept. 9. (Photo: AFP)

A hardline royalist has caused outrage among many young people in Thailand by splashing water on two young moviegoers who failed to stand up for the royal anthem, which is played before every screening in Thai cinemas.

The incident, which took place earlier this week at a theater in the northern city of Chiang Mai during a screening of the Disney movie Mulan, has highlighted conflicting views of the monarchy, which is officially portrayed as an inviolate institution deserving of worship by all commoners.

“While the anthem was played, [a middle-aged man] suddenly splashed water from a cup onto two youths who remained seated,” a young man who claims to have witnessed the incident said in a widely shared post on Facebook.

“I could hear the man taunting the youths over why they didn’t stand up.”

Although any criticism of Thailand’s royal family is punishable by law with 15 years in prison, not standing for the royal anthem, which glorifies the country’s monarchs, isn’t against the law per se.

In recent weeks numerous young Thais have said on social media that they would refuse to stand for the royal anthem in cinemas because they disapprove of the excessive official adulation of the royal family, which they see as an institution tied to anti-democratic political forces in Thailand, including the powerful military.

The Thai royals receive at least 30 billion baht (US$1 billion) in taxpayers' money annually as part of the official budget, even though King Maha Vajiralongkorn, who is reported to spend most of his time in Germany, is widely deemed to be the world’s richest monarch with an estimated worth of $40 billion thanks to various assets and business interests in Thailand.

Much of the money allocated for the monarchy is spent in opaque ways, according to Thanathorn Juangroongruangkit, a young politician who is leader of the Progressive Movement.

“We have seen that the budget allocated to support the monarchy was least scrutinized,” Thanathorn said in a recent post on social media.

At youth-led pro-democracy protests that have been taking place almost daily since early July, several prominent protest leaders, including university students, have begun to violate an age-old taboo by openly calling for a reform of Thailand’s monarchy.

In response, the authorities have charged nearly three dozen of them with various crimes including sedition.

Hardline royalists, meanwhile, have leapt to the monarchy’s defense by saying they will document all cases of lese majeste, a serious crime in Thailand, and report them to the authorities so that alleged culprits could be charged, sentenced and jailed.

However, student leaders have said they will refuse to be cowed in the face of intimidation and will continue to advocate for sweeping political reforms in Thailand in the interest of greater freedoms and democratic rights for all citizens.

“We have been clear about freedom. We will talk about every issue [including] the institution [monarchy],” said Parit Chivarak, a prominent protest leader who studies at Bangkok’s Thammasat University, adding that discussing the appropriate role of the monarchy in society was vital to the country’s political development.