A supporter of Thailand’s monarchy was detained near a site of an ongoing pro-democracy protest at the parliament building in Bangkok for carrying a handgun with live ammunition shortly after six protesters had been shot and wounded, some of them seriously.

The 35-year-old man was found to have a .357 pistol and 10 bullets on him on Nov. 17, but it remained uncertain if he had been involved in shooting the protesters, some of whom were students.

The man said he had decided to join a rival demonstration in defense of the monarchy, which has come under criticism from activists who have been calling for a reform of the institution along constitutional lines.

The man said he was carrying a handgun only for self-defense.

During a spirited pro-democracy rally attended by thousands of young Thais at parliament on Nov. 17, police fired jets of water laced with tear gas from high-powered water cannon at protesters in a bid to drive them back from the perimeters of the premises.

A group of hardline royalists showed up at the site to taunt protesters and during the ensuing melee six demonstrators suffered gunshot wounds from an unknown source or sources.

In all, at least 55 people required hospital treatment in what was the bloodiest day so far during anti-government street protests that have been taking place regularly for months.

Pro-democracy activists who attended the rally said in social media posts that they had seen some hardline royalists firing weapons in their direction.

Video footage recorded at the site showed a small group of men wearing the royalist color of yellow pelting pro-democracy demonstrators with various projectiles including rocks and bottles.

Police failed to intervene to stop the skirmishing. 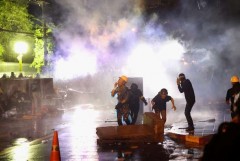 The protesters were gathered outside parliament just as lawmakers inside were debating whether to accept proposals to amend the latest constitution, which was drafted by the army after Prime Minister Prayut Chan-o-cha, then its chief, seized power at the head of a junta in a coup against an elected government in 2014.

Pro-democracy activists see the charter, which accords an oversize role to unelected officials handpicked by the military, including the 250 unelected members of the Senate, as fundamentally undemocratic and want it amended.

Among other proposed amendments are new constitutional limits on the political and financial influence of the monarchy, which has long been officially portrayed as a sacred institution in Thailand.

However, Prayut seems unwilling to compromise in any meaningful manner in the face of such demands.

Instead, the prime minister has called for “national reconciliation” to try and defuse the situation, but his entreaties have fallen on deaf ears among protesters, who want to see him gone.

The day after the mass rally at parliament, some 20,000 young protesters gathered again, this time at the headquarters of the Royal Thai Police in central Bangkok.

In fiery speeches several young demonstrators, standing in the back of small trucks mounted with speakers, called for Prayut to resign as thousands chanted along.

A large group of demonstrators set about spray-painting political graffiti on the road outside the grounds of police headquarters and some of them pelted the walls with colored paint in a form of protest at what they said was the police’s support for an illegitimate government.