Thai protesters defiant as US warns against coup 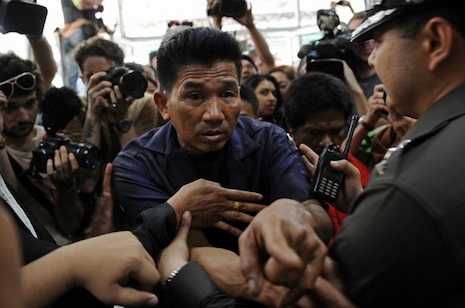 The United States warned Monday against moves to stage a military coup in Thailand as anti-government protesters vowed to press on with their fight after a disrupted weekend election.

With defiant demonstrators pledging to continue weeks-long street rallies aimed at ousting Thai Prime Minister Yingluck Shinawatra, the US said it was "concerned that political tensions" were challenging the divided kingdom's democracy.

Thailand's protest-plagued elections have ushered in a new chapter of political uncertainty that experts say leaves the embattled government increasingly vulnerable to court intervention or a military coup.

"We certainly do not want to see a coup or violence," US State Department spokeswoman Jen Psaki said after opposition protesters prevented voting at thousands of polling stations on Sunday, prompting election authorities to withhold results until ballots are cast in all constituencies.

"We are speaking directly to all elements in Thai society to make clear the importance of using democratic and constitutional means to resolve political differences," Psaki added.

There is little sign of an end to the deadlock, with the ruling Puea Thai party braced for court challenges against the poll – which was boycotted by the main opposition Democrat Party – as well as other legal moves against Yingluck.

The Thai premier's opponents say she is a mere puppet for her elder brother Thaksin, who was ousted by the military in 2006 and lives in Dubai to avoid prison for a corruption conviction.

Hundreds of protesters began another march across the capital Bangkok on Monday to raise support and funds for their three-month campaign to topple the government.

The demonstrators want Yingluck to step down and make way for an unelected "people's council" to oversee reforms to tackle corruption and alleged vote-buying.

With no official figures for voter turnout, both sides claimed success in the election, which passed in relative peace after a gunfight on Saturday in a Bangkok suburb stoked fears of serious clashes between the rival sides.

"According to the constitution, the election must be held on the same day. It was impossible to do it," protest spokesman Akanat Promphan told reporters at the start of the march.

"It's clear that this election must be nullified," he said.

The group said it would dismantle a number of protest stages in the capital but maintain its self-styled "shutdown" of the city.

A defiant ruling party said ballots were cast by more than half of the 44 million Thais who were able to vote. Disruption was mostly in Bangkok and southern opposition strongholds.

"That shows that half of the population wants democracy and wants a parliament formed by the majority," said Puea Thai party spokesman Prompong Nopparit.

Labor Minister Chalerm Yubamrung, who is overseeing the government's security response to the protests, predicted Puea Thai would claim "between 265 and 289 seats" at the polls.

At the last election in 2011, Yingluck's party won more than half of the available 500 parliamentary seats.

The leader of the Democrats, Abhisit Vejjajiva, confirmed they would mount a legal challenge to the "illegitimate" poll because it "did not reflect the intention of the constitution or the people".

Thailand's Election Commission has said 10,000 out of nearly 94,000 polling stations were unable to open, affecting millions of people, although it was unclear how many had planned to vote.

Even if Yingluck wins she will remain in a caretaker role with limited power over government policy until elections are held in enough constituencies to have a quorum in parliament.

"We remain concerned that political tensions in Thailand are posing challenges to the democratic institutions and processes of Thailand," the US State Department's Psaki told reporters in Washington.

"We certainly don't take sides, as you know, in Thailand's political disputes, but we continue to urge all sides to commit to sincere dialogue to resolve political differences peacefully and democratically." AFP