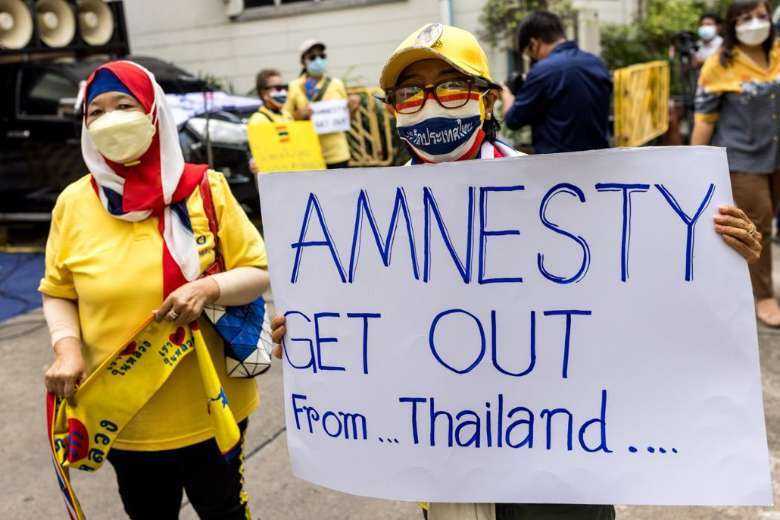 A royalist supporter holds a sign during a demonstration in Bangkok on Nov. 25calling for the human rights organisation Amnesty International to stop operations in Thailand over their support for detained political activists held on royal defamation charges. (Photo: AFP)

The Thai Royal Police have launched an investigation to determine whether the locally based office of Amnesty International poses a threat to national security because of its support for pro-democracy activists.

Prime Minister Prayut Chan-o-cha, a former army chief, has ordered police to investigate after a group of ultra-royalists petitioned him in a letter calling for the prominent rights group to be expelled, a police spokesman said.

Amnesty International Thailand has drawn the ire of ultra-royalists for slamming a decision by the Constitutional Court last month to declare calls for monarchy reform by pro-democracy activists to amount to treason, a crime punishable with death in Thailand.

Last week a group of royalists who call themselves The Center of the People for the Protection of the Monarchy submitted a letter to Prayut at Parliament House, calling on him to order an investigation into Amnesty International, which they accused of “pulling the strings of anti-establishment groups in Thailand to undermine the Thai monarchy.”

Prayut, who seized power in a coup in 2014 and installed a military-backed regime that has rolled back basic rights, reassured the petitioners that his government “is seeking to make sure that NGOs act in a transparent way” and will ensure that they will “not speak ill about the country.”

A small group of monarchists also staged a vocal protest in central Bangkok on Nov. 29 calling for the rights group to leave the country for allegedly interfering in domestic affairs.

At least 155 Thais, including underage high school students, have been charged with defaming the royal family over the past year

The three dozen or so protesters, who were dressed in the royal yellow, shouted “Amnesty, get out!” in unison and carried signs with ungrammatical English such as “Amnesty yourself a slave.”

The monarchy is officially portrayed as a sacred institution that is above politics, but young pro-democracy activists have been arguing that the institution needs to be reformed in line with modern democratic principles.

Among their demands has been the abolition of a controversial law that criminalizes any criticism of the royal family or its members, including past monarchs, and prescribes up to 15 years in prison per count for making statements that are deemed defamatory.

At least 155 Thais, including underage high school students, have been charged with defaming the royal family over the past year in a move that rights groups such as Amnesty International have condemned as a severe violation of their freedoms of speech and conscience.

The same day that the group of ultra-royalists staged a protest against Amnesty International, the rights group posted a tweet in support of two of several prominent pro-democracy activists who are in prison awaiting their trials on charges of sedition, royal defamation and other crimes.

Meanwhile, in a judiciously worded statement, Amnesty International has denied allegations that it is seeking to undermine the Thai nation.

The rights group stressed that it will continue to speak up for Thai people whose rights are being violated “because we firmly believe that every person is born equal and should not be oppressed.”

Some observers say that the current campaign against Amnesty International is part of a wider campaign of intimidation by Thai authorities against critical voices in the Southeast Asian nation.

“The [royalist] group — and the regime — are irked by campaigning that urges fair, constitutional, and legal treatment for political detainees,” noted Thai Political Prisoners, a blog that documents rights violations in the country.

Others say that Amnesty International is unlikely to be ousted in the end.

“I don’t think it’s likely that they [the authorities] will force Amnesty International out because they wouldn’t want to create an international incident,” a seasoned foreign correspondent in Bangkok who asked not to be named told UCA News.

“But by going after them in public the regime wants to send a message that rights activists should keep quiet about any issues involving the monarchy.”