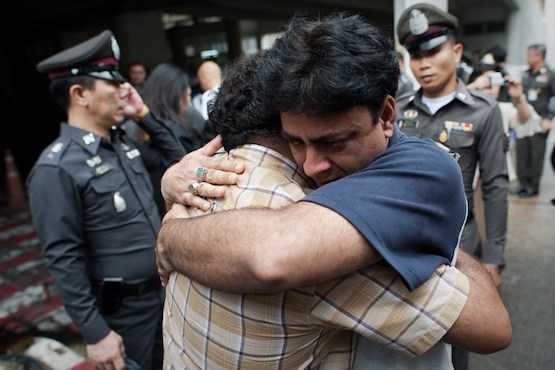 Pakistani refugees released on bail following their detention at an immigration detention center in Bangkok in this file image taken June 6, 2011. Thailand is not a signatory to the U.N. Convention on Refugees and Asylum Seekers. (Photo by Nicolas Asfouri/AFP)

The military takeover that shook Thailand's political life to its core almost three years ago also left its mark on the wider community, and that includes asylum seekers whose belief in Bangkok as a safe haven along a hazardous route to safer pastures, has been seriously challenged.

Among them is Charles Emmanuel whose son Shirjeel was jailed and along with his wife Hina and two children were later deported, despite being granted asylum seeker status by the United Nations High Commissioner for Refugees (UNHCR) in Bangkok.

"The prison conditions are horrendous — overcrowded, hot and humid, poor food, no medication and horrible toilets," Emmanuel said. "Despite paying for him to be released on bail, he continued to be detained. My son's health deteriorated rapidly during his 18 months in detention."

"He was unable to stand without assistance."

Evidence to support Shirjeel's application for refugee status was overwhelming.

In Lahore, his family, dominated by qualified nurses, established the Family Life Foundation (FLF) in 2009 to provide health care, education and natural family planning to women of poor families in a mixed group of Christians and Muslims.

"Subsequently we began to hear that some fundamentalist Muslims took objection to our program of natural family planning as being anti-Islam," Emmanuel said. "We were attacked by a Muslim group with clubs and stones."

Fearing mob violence, the family went into hiding at St. James Catholic Church Sialkot, in Pakistan's northeast, where they were provided sanctuary by Father Nathaniel Bernard.

Soon after, Charles and Edna were invited by The Billings Family Planning Foundation to a conference in Melbourne where organisers heard their story. They contacted the appropriate authorities and they were granted asylum three months later.

Eventually a daughter, Sunita, and a son, Sunil — both adults and single — were granted humanitarian visas to join their parents in Australia while Shirjeel and his wife Hina — who worked for the family foundation — remained in Pakistan where trouble was never too far away.

Shirjeel was told to produce his parents "or face the consequences" — meaning mum and dad were to be charged under the blasphemy law. Relatives risked being beaten or even killed for hiding "blasphemers." Then, after hearing of a plot to kidnap his youngest daughter, Shirjeel applied and was knocked back twice for humanitarian visas to Australia.

The family fled to Bangkok in September 2013, where they hoped for a sympathetic hearing from the UNHCR and to meet with the International Catholic Migration Commission (ICMC).

"They registered with the UNHCR and were granted Asylum Seeker Status on Jan. 30, 2014. We felt relieved that our son and family were now safe," Emmanuel said.

An interview for refugee status was scheduled with the UNHCR but not until November 2015.

A meeting too far

Once martial law was declared in Thailand on April 20, 2014, anyone who had overstayed their visitor visas were considered illegal and faced imprisonment. Thailand is not a signatory to the U.N. Convention on Refugees and Asylum Seekers.

Phil Robertson, deputy director of Human Rights Watch's Asia division, said the military had made life more difficult for urban refugees because as the junta's official name, the National Council for Peace and Order, implies they are about imposing order on unusual or difficult situations.

"Urban refugees are not recognised as such by the Thai government which considers them as messy law-breakers and subjects them to more frequent raids and immediate arrest and indefinite detention in an immigration detention center," he said.

Emmanuel added it was dangerous for Shirjeel and Hina to go to the market for fear of arrest. "I sent $750 every month enabling them to live in a one-room apartment," he said.

Then, shortly before the scheduled appointment in late 2015, they were advised to prepare for their interviews but were then told the interview was postponed until October 2016.

"This was shattering news," said Emmanuel, who earns a basic salary as a security guard in Melbourne.

On Oct. 20, 2015, Shirjeel was arrested and taken to the Immigration Detention Center.

"This made life much more difficult for my daughter-in-law and her two young children and increased the cost of supporting the family as my wife Edna spent a couple of months at a time in Bangkok to provide Shirjeel with food in prison."

They got by until March 2016 when Shirjeel's application for refugee status was finally turned down.

"To avoid them being sent to another detention center, we had no option but to plead for his repatriation to Pakistan. We had to provide the money for four airline tickets almost immediately, which has placed us in debt.

Shirjeel and his family are currently housed in a remote Pakistan village where they live under pseudonyms. Emmanuel says their present situation is the same as it was three and a half years ago: dire.

"They cannot live in our family home. Their location is kept secret even from family and friends in Pakistan in case they are found by the people who were targeting them. It is impossible for my son and his wife to work and for their children to go to school," he said.

Emmanuel's sentiments were backed by Robertson who added that third country resettlements from Thailand can take years and are granted to only a few.

"To compound the problem, Christian Pakistanis tend to cluster as communities in Bangkok, so they are an easy target for immigration raids," he said. "Once you're being held in immigration detention, it's a disaster."

Meanwhile, Vivian Tan, spokesperson for the UNHCR in Bangkok, said lengthy delays in arranging meetings, like that experience by Shirjeel, were not uncommon due to the complexity of cases and a lack of resources but the backlog has been reduced due to increased funding.

"I can't say if things have changed under the current government but note that they are currently exploring a screening mechanism to distinguish between refugees and migrants which we hope can help enhance the identification and protection of refugees," she said.

"We are trying to find a place for Shirjeel, his wife Hina and their two young children to live in safety and freedom," Emmanuel said. "Life will never be normal again for them as long as they live in Pakistan."