Encouraged by an Italian Catholic priest, villagers are escaping poverty by growing coffee beans instead of opium poppies 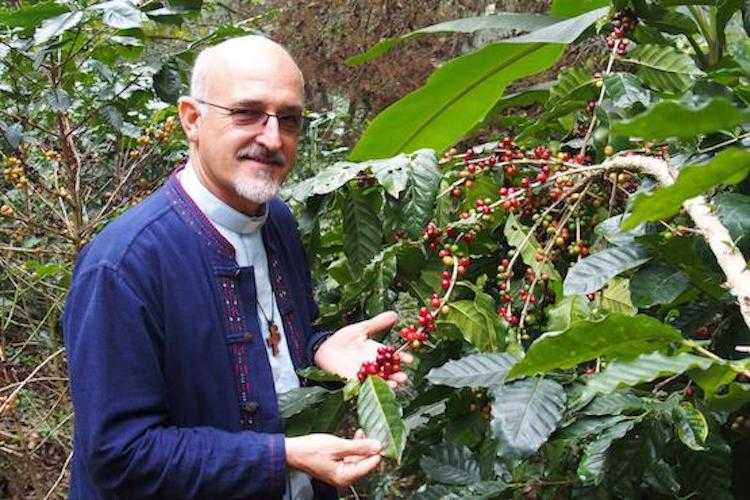 Father Bruno Rossi turns a handle and twirls a knob. Another cup of piping hot espresso is ready.

Operating the coffee machine is part of a day's work for the Italian Catholic priest who lives among hilltribe villagers in the mountainous north of Thailand.

Father Rossi is the eponymous creator of Caffé Bruno, a startup that promotes and sells finely roasted Arabica beans cultivated by impoverished subsistence farmers who are predominantly Catholic and belong to several tribes, including the Lahu, Hmong, Akha, Karen and Yao.

Caffé Bruno markets itself as "the finest Italian aroma of Thai coffee" and has its own coffee house, which is staffed by hilltribe youths who might otherwise go jobless. The establishment, which is popular with tourists, is in the Catholic Mary Queen of Peace Center in a rural district of Lampang province where Rossi, 49, has worked as a parish priest since 1999.

"I gave my name to the venture, but it's their coffee," he explains.

A lanky man with aquiline features and a graying goatee, Father Rossi resembles a Broadway version of Don Quixote. "I'm helping local farmers sell their produce," the clergyman says. "With the proceeds from selling coffee, we finance scholarships for children in the villages."

Father Rossi's mission looks after some 800 children in 40 ramshackle hamlets. It provides schooling and extracurricular activities for the kids at four Catholic schools where they learn arithmetic, Thai language and other subjects.

They also learn about their ancestral traditions and are encouraged to wear the colorful attire of their respective tribes on weekends.

"I want them to remember their roots and be proud of themselves. It's very important," says Father Rossi, the son of a carpenter who himself hails from a small mountain village near the northern Italian town of Padua. "Their culture is their greatest treasure."

The priest launched his coffee-selling venture in 2013 to help local coffee growers sell their produce for better prices. "The beans they grow are excellent, but they roasted them into charcoal," he recalls. "Most of their beans went to waste. It was such a shame."

He set out to change that. The priest taught himself how to roast beans and make good coffee. He set about raising funds in Italy by selling trinkets made by hilltribe children in his parish and he obtained a coffee roaster and a professional coffee machine from his native land as donations.

He was in business.

Just a year later, in 2014, Caffé Bruno's espresso was awarded a gold medal by the International Institute of Coffee Tasters at a competition in Brescia, Italy.

"It's a miracle we won," Father Rossi says, only half in jest. "Roasting coffee is like raising children. You have to bring out the best qualities that both beans and children already have within them."

He remains a relentless promoter of his parishioners' coffee, showcasing their produce at trade shows and market fairs in Bangkok and other cities in Thailand. He buys unroasted coffee beans from subsistence farmers at prices above the market rate. He then roasts the beans and sells them in neat 250g packets featuring an image of hilltribe people at a coffee harvest under the motto "Respect for People and the Environment."

"I try to help them [hilltribe villagers] lift themselves out of poverty and I want to do it in a way that lets them lead traditional lives by living off the land," he says. "The idea is to help them become self-sufficient." Many hilltribe youths, Father Rossi says, leave their small communities to try their luck in towns and cities, only to end up becoming victimized in the process. Young women may be sucked into prostitution to support themselves, while young men may be lured into criminal activities or other forms of exploitation.

Even back home in their villages, though, life can be harsh. Many hamlets lack electricity and running water. Most locals eke out a living from tilling the land, although many of them can't even do that, not having any land of their own to till.

"Drug abuse is a problem and so is poverty," says Father Rossi, who regularly visits impoverished hamlets to hand out clothes, sacks of rice and potted plants to the neediest villagers.

Bualoi Jamoo can attest to the extent of destitution in her village. "We don't have a regular income. We live hand to mouth," says the 28-year-old Lahu woman who attended a trade show recently in Bangkok with Father Rossi to promote her community's coffee produce.

Naja Jacha, 23, who is also Lahu, concurs. "We have a hard life," she says. Her hamlet lacks a steady supply of potable water and it can be accessed only by a dusty dirt road that can turn treacherously muddy in the rainy season. Mobile phones have made inroads into the village but remain luxuries for most locals who are largely cut off from the outside world.

Their isolation can be both a blessing and a curse for villagers: a blessing because it helps them preserve their traditional ways, a curse because they may fall into self-destructive patterns.

"We used to grow opium but we've started growing coffee," Tua Jangaroon, 57, a Hmong farmer, states matter-of-factly. "People got addicted to opium and just wasted their time [being in a stupor all day long]." A Catholic in Rossi's parish, Tua now sells his own brand of home-roasted "hilltribe" coffee with his wife, Mhee. "Coffee is a much better crop than opium," he says.

Across much of where Arabica coffee is now cultivated in the mountains of Lampang, opium poppies were once grown. Opium cultivation is illegal in Thailand, and while some hilltribe communities continue to grow opium poppies clandestinely, many have switched to other crops like coffee and tea. "The soil that was once used for growing opium is great for coffee," Father Rossi says.

Coffee plants thrive in the shade of larger trees in forests at higher altitudes, so the mountainous terrain of Lampang is well suited to coffee cultivation.

"Coffee can be an environmentally friendly crop," says Thirach Rungruangkanokkol, executive director of the Agricultural and Food Marketing Association for Asia and the Pacific, which assists hilltribes in adopting sustainable agricultural practices in collaboration with Father Rossi's own project.

"In order to have good coffee, locals need to protect big trees," Thirach says. "And if villagers keep on protecting big trees under which they grow coffee, they will protect their forests."

Thanks in no small part to Father Rossi's initiative, more and more villagers are seeing the positive effects of coffee cultivation on their lives.

"Growing coffee has been a benefit to us," says Teppirak Yang, 22, a member of a Karen tribe whose family were animists until they converted to Catholicism a few years ago. "Caffé Bruno is in the heart of the community. We can sell our coffee to Father Bruno and use the money to have a better life for ourselves. We've had better opportunities because of him."