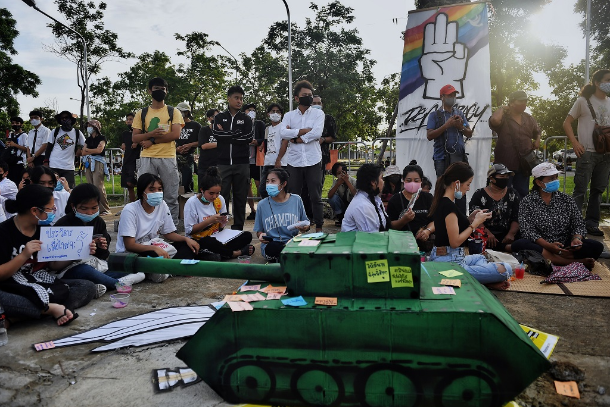 A mock tank is seen in front of student protesters during an anti-government rally at King Mongkut's Institute of Technology in Bangkok on Aug. 19. (Photo: AFP)

Thailand’s Foreign Minister Don Pramudwinai has made no secret of what he wants foreign journalists to do: say no more!

At a press briefing with Thai journalists on Aug. 18, the senior diplomat suggested locally based foreign correspondents should mind their own business and stop reporting on the ongoing pro-democracy protests against his military-allied government. “Tell them: ‘Hey you, go and do something more useful for yourself,” he reportedly said.

Commenters were quick to lambast Don, who also serves as deputy prime minister, over his suggestion.

“I think he meant to say: Can all foreigners look the other way whilst this dictatorship violates Thais’ human rights and freedom of speech?” one of them observed acerbically in a comment posted online.