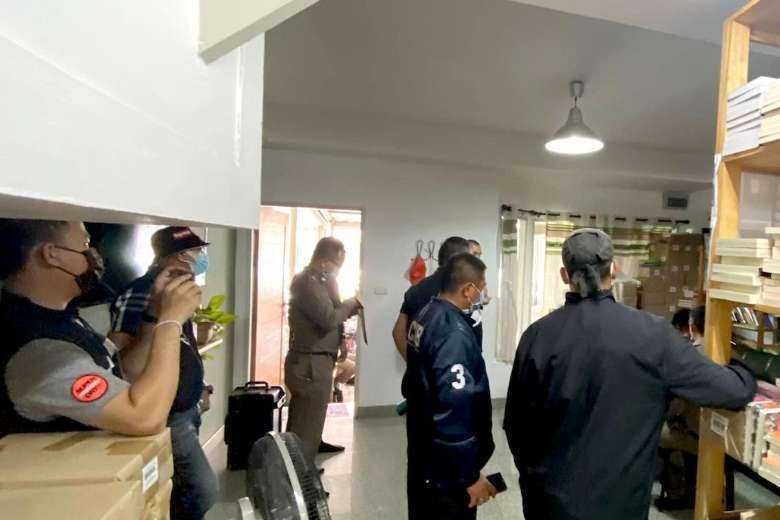 Thai authorities appear to be stepping up their campaign against pro-democracy activists, especially those who are advocating monarchy reform.

This week alone, police have launched crackdowns including a raid on the office of a publisher in Bangkok and the issuing of new indictments for royal defamation.

Some 30 officers raided the office of the progressive Same Sky Books and Magazine on Jan. 20 and confiscated the mobile phone and computer of editor Thanapol Eiwsakul.

In addition, they searched the premises for a book titled Monarchy and Thai Society, which presents a case for liberalizing the Thai monarchy, according to staff at the publisher who posted photos of the raid online.

Liberal-minded Thais were quick to condemn the authorities over the raid in comments posted online.

“This is what repressive regimes do — try to outlaw honest and open debate,” one commenter said.

In their artwork the two students also condemned the royal defamation law, which is Article 112 of the Criminal Code, by using an expletive

On Jan. 18, police in the northern city of Chiang Mai charged two university students with violating the royal defamation law, which prohibits any criticism of the monarchy and prescribes up to 15 years in prison per charge.

The two students at Chiang Mai University were indicted over an artwork they exhibited last year at the university’s gallery depicting the Thai national flag with the blue stripe, which represents the monarchy, absent in the tricolor, according to the Thai Lawyers for Human Rights group.

In their artwork the two students also condemned the royal defamation law, which is Article 112 of the Criminal Code, by using an expletive.

“More political prisoners? More lives and voices stifled?” one online commenter noted after the news of the indictments.

Meanwhile, a network of vocational school students in the northern province of Nakhon Sawan reported being followed by around 10 plainclothes police officers when they launched a campaign to collect signatures to have the royal defamation law repealed.

The students said they had been warned by the officers against campaigning for the law to be repealed.

Since November 2020, some 170 Thais, predominantly young people, have been charged with royal defamation in what rights activists say is a concerted effort to silence people who want to see democratic reforms in the country, which has been run by a military-allied regime since a coup in 2014.

Several leaders of a student-led pro-democracy movement have been charged multiple times, with one university student facing 23 counts and another 14 counts.

If convicted on all counts and given the maximum sentence on each, these two students could be jailed for 345 years and 210 years respectively.

International rights groups have been calling on Thailand’s government to stop using the law, but Thai authorities have shrugged off such calls by saying the monarchy was a key pillar of the nation and protecting it was a matter of national security.