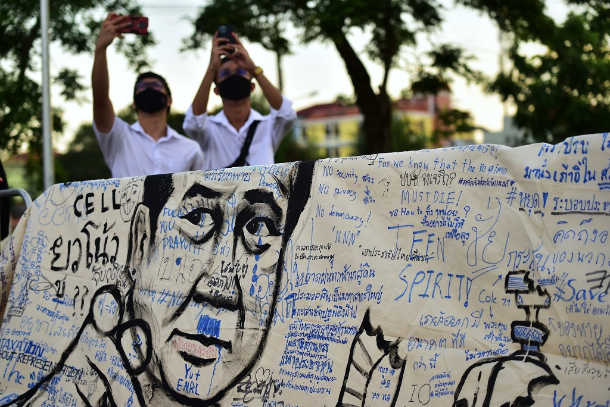 Thai authorities have launched a campaign of intimidation against young pro-democracy activists with arrest warrants issued on Aug. 19 for six student leaders on charges relating to an anti-government rally held last week at Thammasat University in Bangkok.

The activists stand accused of sedition and other serious offenses in addition to violating an emergency decree that prohibits large gatherings during the pandemic.

Pro-democracy activists have accused the authorities of abusing repressive laws to try and intimidate prominent student protesters into silence, including a draconian statute that prohibits any criticism of the royal family.

However, Maj. Gen. Chayut Maraya, a provincial police chief handling the cases, denied that police were trying to intimidate students. “Everything we’ve done is fair and transparent,” he said. “There’s been no harassment.”

If convicted, the six activists face the prospect of years in prison because during the protest on Aug. 10 they called for a reform of Thailand’s royal family, implying that it has been meddling in anti-democratic politics. Any criticism of the royals is punishable by law with 15 years in prison.

The targeted activists remained defiant, however.

“I’m not surprised to see this [charge brought against us] in a country where there’s no freedom of speech,” Panusaya Sithijirawattanakul, a young woman who has become a prominent and outspoken leader of the student-led pro-democracy movement, said in a post on Twitter on Aug. 19.

“Our speeches must have pushed someone’s button. Do you think that we will retreat? We will fight more because our enemy is only one person,” she added in what appeared to be a coded reference to King Maha Vajiralongkorn, the mercurial monarch who spends most of his time in Germany, according to foreign media reports.

In recent weeks student-led pro-democracy protests, rallies and flash mobs have been taking place almost daily at high school, college and university campuses around Bangkok and elsewhere in Thailand from the rural northeast to the Muslim-majority south.

In fiery speeches student leaders have been calling for Prime Minister Prayut Chan-o-cha to resign, calling his government illegitimate.

Prayut, a former army chief, seized power in May 2014 in a military coup against an elected government, which conservative and royalist protesters had been accusing of seeking to undermine the country’s monarchy during rowdy and at times violent street protests in Bangkok earlier that year.

Six years on, Prayut remains in charge after elections held last year gave him a degree of electoral legitimacy, although foreign observers said the polls were rigged in favor of his conservative coalition.

The Thai military has a history of suppressing pro-democratic protests by force. In 1976 soldiers and members of right-wing paramilitaries lynched scores of students at Thammasat University in Bangkok. Three years earlier, the military killed large numbers of other peaceful protesters, while scores of demonstrators were also killed in 1992 and 2010.

Prayut recently cautioned police against using force against student protesters, but the authorities have clearly been stepping up a campaign against the leaders of these protests.

Several prominent protest leaders were detained last week and charged with various crimes, including sedition, before being released on bail.

One of them was human rights lawyer Arnon Nampha, who was arrested and charged for calling for a reform of the monarchy along constitutional lines. Arnon was detained again on Aug. 19 and was forced to spend the night in police detention.

Politically active students at various schools have also reported instances in which their teachers photographed them during pro-democracy rallies on campus, likely with the aim of reporting the students to authorities.

Student activists calling themselves the Bad Student group marched to the Ministry of Education in Bangkok on Aug. 19, demanding that their freedom of assembly be respected.

They also condemned Education Minister Nataphol Teepsuwan for refusing to condemn acts of harassment and intimidation against student protesters.