Cambodian migrants are detained by police in Ta Phraya district in the eastern Thai province of Sa Kaeo, bordering Cambodia, in May. (Photo: AFP)

Scores of civil society organizations and migrant rights groups from across the world have called on Thailand’s government to release migrant workers from Cambodia who were detained last week in Bangkok while submitting a petition on behalf of other workers.

The seven migrant workers were part of a labor rights delegation that visited the country’s Ministry of Labor on Oct. 29 asking for better protection of migrant workers from Myanmar, Cambodia and Laos, who make up the bulk of Thailand’s millions-strong foreign workforce.

Among their demands were improved access to health care during the Covid-19 pandemic as well as more expedient bureaucratic measures while processing their work-related documents.

However, during the negotiations between rights representatives and Thai authorities, the seven Cambodian workers — three women and four men — were detained by plainclothes police and immigration officers while they were waiting outside the ministry.

The migrant workers remain in detention and are at risk of being deported for allegedly having entered Thailand illegally.

“One of them is a single mother who had that morning told her children she would be out to process her work permit but would come back in the evening. Now, her two children are left motherless having no idea where their mother is,” stated the 100 civil society organizations that have signed an open letter to Prime Minister Prayut Chan-o-cha.

More than 30,000 illegal migrants, including women and children, have so far been deported this year, according to the Ministry of Defense

“Arresting these migrant workers, who are human rights and labor rights defenders, who went to the ministry to submit representations is wrong and a violation of human and labor rights,” noted the signatories, which included Thailand’s National Catholic Commissions on Migration.

“It is shocking that this happens after the Thai cabinet on September 28 had made and publicized a decision to allow undocumented migrant workers from Myanmar, Laos and Cambodia to continue to stay in Thailand to enable time for employers and migrant workers to apply and receive official permits,” the signatories said. 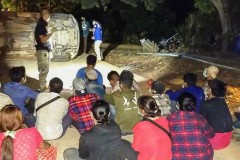 The signatories went on to call for the immediate release of the seven detained Cambodian nationals.

“[We urge] the Thai government to forthwith apologize and to provide an effective remedy and compensation for seven migrant victims of human rights violations,” they said.

In recent months Thai authorities have stepped up efforts to detain and deport migrant workers crossing illegally into the country from the three neighboring nations in search of work.

More than 30,000 illegal migrants, including women and children, have so far been deported this year, according to the Ministry of Defense.

In the past few weeks alone, thousands of migrants, primarily from war-torn Myanmar, have been detained by Thai authorities for crossing into the country illegally.

However, rights groups allege that several senior officials have been involved in assisting human trafficking rings

Lt. Gen. Kongcheep Tantravanich, the ministry’s spokesman, said earlier this week that Thai businesses have been instructed not to hire migrant workers without proper permits and valid Covid-19 tests.

However, rights groups allege that several senior officials have been involved in assisting human trafficking rings that continue to smuggle migrants into Thailand.

In their open letter to Thailand’s prime minister, the 100 migrant and human rights groups called for a moratorium on the arrest and detention of undocumented migrant workers in Thailand.

“We call on the Thailand’s National Human Rights Commission, UN and others responsible and concerned for defending human rights to act to end this human rights violation,” they said.