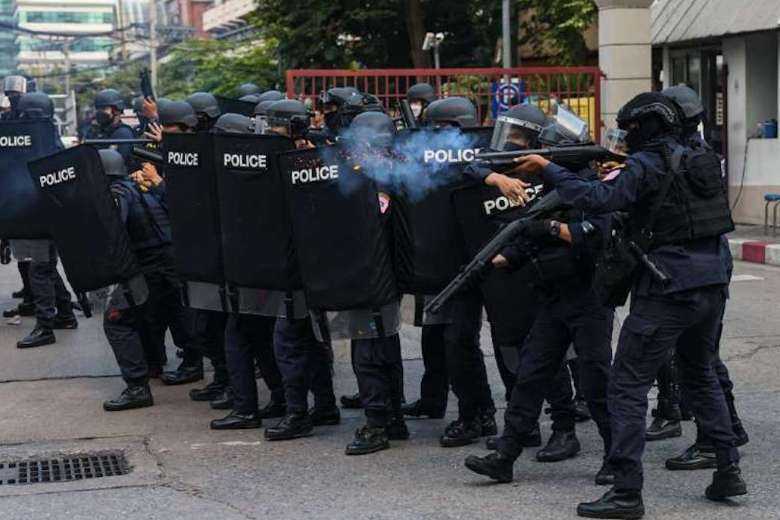 A riot police officer fires a weapon as protesters gather in Bangkok on Nov. 14 after a court ruled that speeches by protest leaders calling for royal reforms amounted to a bid to overthrow the Thai monarchy. (Photo: AFP)

Prominent Thai journalists have panned a proposed amendment to the media law that would enable local authorities to suspend licenses over content that violated “the good morals of the public.”

In effect, the newly proposed law, which is called the Draft Media Ethics and Professional Standards Promotion Act, would increase censorship of local media outlets that already labor under several restrictions in the form of punitive defamation laws and other legislation, media professionals say.

The new law, which is due to be up for debate among lawmakers in parliament, seeks to require media organizations to receive a license from the Press Profession Council, a newly established overseeing body with its members appointed by the government.

The proposed law says that the exercise of free speech “must not go against the duties of Thai people or the good morals of the people,” which its critics say is so vaguely worded that it could mean practically anything.

In addition, private citizens could also lodge complaints against media organizations if they felt that reporting by these outlets was unethical.

“The government is trying to pass a law to control the press again,” Vanchai Tantivitayapitak, a former deputy editor of the Thai Public Broadcasting Service, said in a post online.

Cambodian, Chinese and Vietnamese operatives have been allowed to come and arrest dissident exile journalists or bloggers from their country in order to ‘repatriate’ and then jail them

“The keyword is ‘good morals,’ which can be vaguely interpreted by the Press Council. Some media outlets, if violated, will probably be shut down,” he added.

Other prominent journalists have expressed similar sentiments, warning that, if it passed, the law would further curtail the freedom of the press in Thailand.

According to foreign media observers, press freedom is severely limited in the country, which is ruled by a military-allied regime that seized power in a coup in 2014 and has rolled back basic freedoms.

Several topics such as vocal demands by young pro-democracy activists for a reform of the monarchy are rarely reported by media outlets, which routinely self-censor to avoid being charged with royal defamation, a serious crime in Thailand, and other offenses.

“The coverage or non-coverage of the massive pro-democracy demonstrations in 2020 confirmed the scale of self-censorship within the Thai media. One of the key demands being made by the protesters — reform of the monarchy — was systematically erased from mainstream media coverage,” Reporters without Borders, which monitors press freedom worldwide, noted in its report on Thailand last year.

“The government used the coronavirus crisis to issue a decree making the dissemination of information that is ‘false or capable of causing fear in the public’ punishable by up to five years in prison and allowing the authorities to ‘correct’ any published information.

“The authorities, meanwhile, behave in a very indulgent manner towards certain regimes: Cambodian, Chinese and Vietnamese operatives have been allowed to come and arrest dissident exile journalists or bloggers from their country in order to ‘repatriate’ and then jail them.”