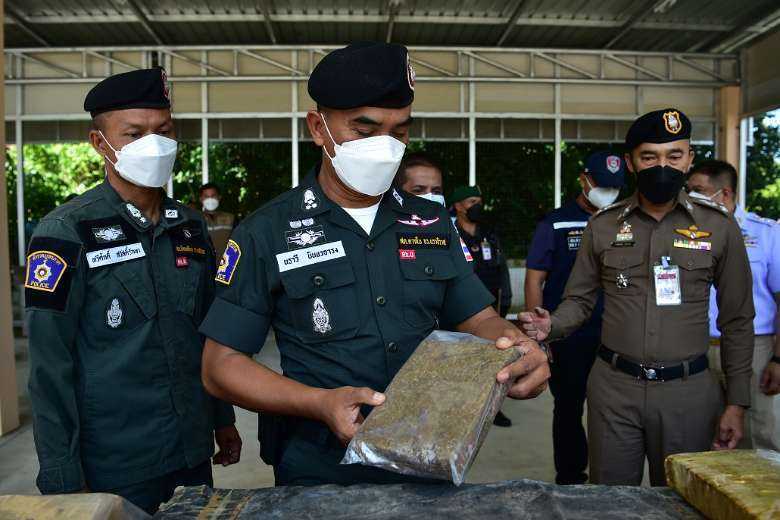 A Thai police officer holds a confiscated packet of marijuana at a press conference, following the interception of a smuggling operation from Thailand to Malaysia, in Takbai district in the southern Thai province of Narathiwat. (Photo: AFP)

Even as Thailand remains in the grip of a nationwide epidemic of illegal narcotics, the country is winning the war against drug dealers and traffickers, according to a senior government official.

Somsak Thepsutin, the minister of justice, said at a press conference on May 18 that nearly 8.5 billion baht (US$245 million) has been seized from suspected traffickers and dealers in nationwide raids this year.

Somsak warned, however, that authorities would need to carry on with their sustained campaign against international trafficking networks that have flooded the Southeast Asian nation with various drugs from cheap methamphetamines to opiates.

By targeting the financial assets of suspected traffickers, local authorities can deprive them of the wherewithal to continue smuggling narcotics into Thailand from Myanmar and Laos, the minister said.

In a related development, Prime Minister Prayut Chan-o-cha has declared it a national priority to eradicate illicit narcotics through broad-based collaboration among government agencies.

Thailand has for decades been a regional hub of illegal narcotics and has also struggled with endemic substance abuse among citizens, which has particularly affected economically disadvantaged communities.

In recent years, however, drug trafficking has reached massive proportions as cheap methamphetamines manufactured in the conflict-driven Shan state in Myanmar have continued flooding into Thailand via Myanmar and Laos.

Earlier this month Thai anti-narcotics and border police officers shot eight suspected drug traffickers to death in a shootout in a jungle in the northern province of Chiang Rai, near the border with Myanmar. Some 6.7 million methamphetamine pills were seized in the operation.

Drugs smuggled by the network into Thailand from Myanmar had been trafficked into Malaysia, from where some of the illegal substances were then smuggled to Australia, local officials said.

Thailand has also been stepping up its cooperation with the United Nations Office on Drugs and Crime (UNODC) in order to tackle the scourge of illegal narcotics in the country.

“It is important to be able to count on committed partners like Thailand to support wider regional security and rule of law efforts,” UNODC executive director Ghada Waly noted last month.

“Just as crucially, we need additional focus on slowing and lowering demand for drugs by expanding our work with Thailand and the region on prevention, treatment and health services, as well as on drug policy and justice reforms to reduce the burden on policing and court systems, and to address prison overcrowding,” Waly said.

“Practical cooperation at all levels is required to make a difference, and we have a strong partner in Thailand to help lead on these efforts,” she added.