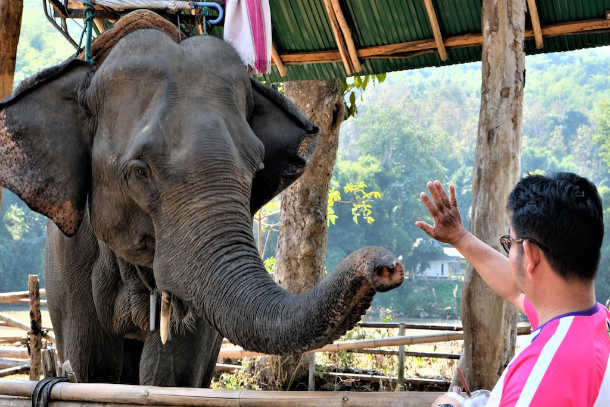 A Chinese tourist teases a captive elephant at a camp in northern Thailand where the jumbos are used for rides. (UCA News photo)

Many of Thailand’s captive elephants are feeling the effects of the Covid-19 pandemic and lack adequate amounts of food, according to conservationists.

“If there is no support forthcoming to keep them safe, these elephants, some of whom are pregnant, will either starve to death or may be put on to the streets to beg,” Lek Chailert, founder of the Save Elephant Foundation, has warned in an interview.

Aiming to limit the spread of the novel coronavirus, Thailand has closed its borders to foreign visitors, which has led to the collapse of the country’s vital tourism industry.

With no tourists around, several elephant camps, where captive jumbos are used by their keepers to entertain visitors by offering rides, have run out of money to spend on the upkeep of resident pachyderms.

Keeping the animals is costly as adult Asian elephants consume around 200 kilograms of food a day. With the loss of their income from tourism, many mahouts could now decide to beg on the streets with their elephants or use them for illegal logging in mountainous areas.

Logging, which Thailand banned for elephants in 1989, often takes a heavy toll on the animals by causing them to suffer severe injuries. Begging on the streets is similarly dangerous for elephants as the animals can become victims of road accidents.

“The worst-case scenario is that owners will have to choose between themselves and their elephants,” the manager of a sanctuary for elephants in northern Thailand told the BBC.

The plight of Thailand’s iconic elephants isn’t new, however. For years, conservationists have been warning about inadequate conditions and outright abuse at many elephant camps that are geared toward tourism.

Some 4,000 elephants are in captivity around the country and numerous jumbos are employed to offer rides to tourists all day long. By having to carry heavy loads on their backs during these rides, elephants can end up with damaged spines.

Elephants are highly social animals and at many of these camps they are prevented from socializing, experts say. Visible signs of distress and despondency are routine among captive elephants in Thailand.

“The Covid-19 pandemic has worsened the problems Thai elephants are facing, but it did not cause those problems,” Darunee Sukanan, a Thai environmentalist, told UCA News.

“This pandemic will pass and the tourists will return, but we will still be left with the task of making sure that all captive elephants are treated well in Thailand.”