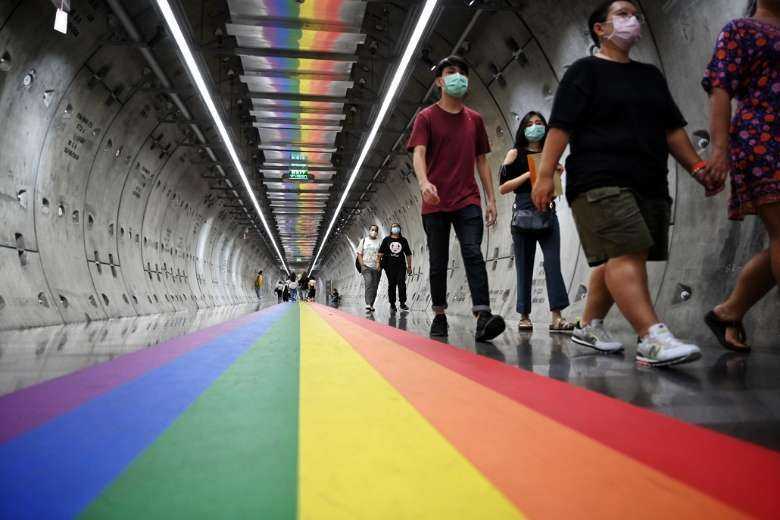 People pass along a rainbow walkway inside the Samyan Mitrtown complex in Bangkok on June 11 in celebration of LGBTQ Pride Month. (Photo: AFP)

A statement in which Thailand’s Constitutional Court has argued that permitting same-sex marriage in the country would violate the “natural order” has angered LGBTQ activists and rights advocates.

Last month the country’s highest court ruled that a clause in Thailand’s latest military-drafted constitution that states that marriage can only be contracted between a man and a woman does not violate another clause that states that all citizens are equal under the law regardless of their sexual orientation.

In a newly issued 12-page statement explaining the grounds for its ruling, the court says that marriage equality for same-sex couples “would not only overturn the natural order but it would also shake the very foundation of society and humanity.”

The statement goes on to discourage lawmakers from legalizing same-sex marriage, arguing that doing so would impose an undue burden on society in the form of welfare and other benefits such as further maternity and paternity leaves.

In addition, the statement argues that if allowed to get married and adopt children LGBTQ people could not form family bonds such as the ones that exist between men and women and their children in traditional unions.

The ruling against same-sex marriage came because a lesbian couple had petitioned the court last year saying it violated the constitution that gays and lesbians were not allowed to wed the person of their choice.

In practice, [these same-sex parents] care for their adopted children as their own children, but the law does not accept them as legal parents

LGBTQ activists were outraged by the court’s justification for its decision, saying it displayed bigotry on the part of the eight judges who signed it.

“I felt horrible [about this ruling] because it reinforces the idea that the state, and the Constitutional Court as the representative of the state’s mindset and power, does not see that what we are facing is a violation of human rights,” said Matcha Phorn-in, a prominent LGBTQ rights activist.

“In practice, [these same-sex parents] care for their adopted children as their own children, but the law does not accept them as legal parents as if they were not in the same family,” the activist said.

In the wake of the court’s ruling, activists have also been calling on their supporters not to lend legitimacy to government-sponsored LGBTQ initiatives.

“Please, don’t trust the Go Thai Be Free campaign operated by the Thai government [because] it is so fake and completely propaganda!” Nada Chaiyajit, a human rights campaigner, said in a post on Facebook, referring to a campaign by the Tourism Authority of Thailand that markets the country to foreigners as a haven for LGBTQ people.

Other outraged Thais were no less scathing. “I am truly speechless,” one commenter said on social media. “When will they treat everyone in Thailand as equal human beings?”

Thai LGBTQ rights activists have launched an online petition calling for marriage equality that has gathered 275,000 signatures within a few days.

The aim is to press for a marriage equality bill to be placed before parliament in the hope that same-sex marriages will finally be legalized in the country.