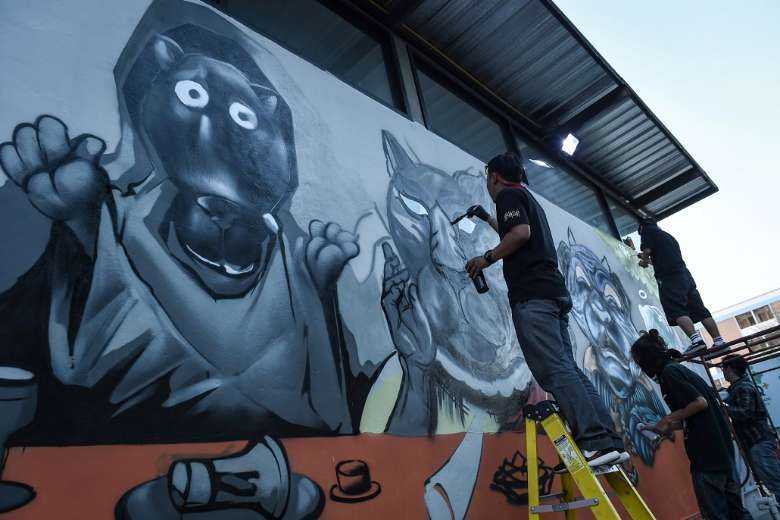 Graffiti artists paint a mural of panthers in Bangkok in March 2018 in protest against the illegal wildlife poaching by construction tycoon Premchai Karnasuta. (Photo: AFP)

In a decision that has pleased environmentalists and rights activists alike, the Supreme Court of Thailand has sentenced a construction magnate to more than three years in prison for killing a critically endangered black leopard in a nature reserve.

Premchai Karnasuta, the billionaire head of a prominent Thai construction company, was convicted back in 2019 by a lower court of several crimes such as trespassing and hunting illegally in Thungyai Naresuan Wildlife Sanctuary in central Thailand where the tycoon and two of his assistants were discovered by park rangers in February 2018 in the possession of animal carcasses.

Premchai and his party were found to have killed several animals, including a black leopard, yet outraged conservationists expressed doubt at the time that the businessman would ever be convicted because he had been a beneficiary of lucrative government contracts.

The case caused widespread outrage among Thai pro-democracy activists for whom the killing of the big cat became a rallying cry against a culture of impunity among the rich and powerful in one of the world’s most economically unequal nations where the top 1 percent own two-thirds of the country’s wealth.

The day before the Supreme Court’s verdict was announced on Dec. 8, hundreds of environmentalists and rights activists gathered in central Bangkok demanding justice for the poached big cat. They listened to fiery speeches by activists and displayed artworks featuring a black panther.

“In Thailand there is one set of rules for rich people and another set of rules for everyone else,” one protester, who wore a T-shirt with a print of a black panther on front and back, told a UCA News reporter.

“This case is not just about someone poaching illegally in a protected forest. It’s about rich people feeling entitled to do whatever they want.”

The mood changed somewhat the following day when the Supreme Court upheld the lower court’s conviction of Premchai and increased his initial prison sentence from 16 months to three years and two months. Two of his accomplices also received similarly lengthy prison terms in the decision.

However, doubts continue to linger about whether Premchai will be forced to spend much time in prison despite his sentence.

“It’s unfortunately likely that they will find a way to make him come out early (e.g. a pardon), but [at least] he will definitely spend a night in prison,” one commenter noted online, echoing a common sentiment.