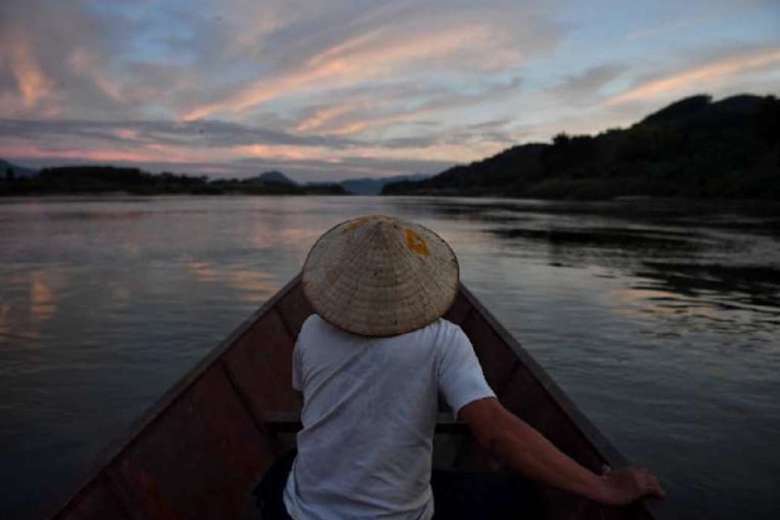 A man sits in a fishing boat on the Mekong River in Nong Khai province in Thailand. Concern is mounting among environmentalists over plans by Laos to build more dams on the river. (Photo: AFP)

Environmental activists are concerned about the impact of a proposed Mekong River dam in Laos after a Thai court refused to hear an appeal over the case.

The huge Pak Beng Dam project is among 11 proposed mainstream dams that are part of Laos’ economic plan to become the “battery of Southeast Asia” through selling hydropower to neighboring countries.

With the Mekong River making up half of the 1,845-kilometer border between Laos and Thailand, Thai citizens have been opposing the plans.

The Pak Beng Dam project’s developer is the China Datang Overseas Investment Co, which started a consultation procedure in 2016.

In June 2017, the Rak Chiang Kong Conservation Group and the Thai Mekong People’s Networks from Eight Provinces, petitioned the Administrative Court to retract an environmental assessment used to support the decision by the Mekong River Commission (MRC) to allow the project to proceed.

The MRC is an inter-government agency that works with the governments of Laos, Cambodia, Thailand and Vietnam to manage the Mekong’s resources.

The groups claimed that the original community survey was flawed in terms of legal compliance and a lack of assessments on the transboundary environment, health and social impacts, Radio Free Asia reported.

After losing their case at a lower court, the groups appealed to the Central Administrative Court, which on Feb. 25 said it had no jurisdiction over the case.

“Thailand doesn’t have a law requiring transboundary impact assessment [and] no jurisdiction over projects inside of Laos PDR. The notification, prior consultation, agreement, concerns and suggestions on the Pak Beng hydroelectric dam to the MRC and Laos PDR were done on behalf of the government in line with international protocols. This case is not under the administrative court’s jurisdiction,” a judge said.

The court decision comes after Laos independently suspended the project in November to conduct comprehensive assessments on potential environmental and transboundary impacts. Jirasak Inthayos, one of the petitioners, said the decision was worrying because it set a legal baseline that invalidates checks and balances.

“I’m disappointed with Thai agencies because they don’t have a role to oppose or stop anything and the document was used as a condition to build the dam,” Jirasak told BenarNews.

“The civil opinion survey was just a formality in which they did not really listen and respond to us. The Mekong situation is getting worse and worse. We want the project to stop … and careful study must be carried out.”