A Thai court has denied bail to a university student charged with royal defamation in a ruling that her supporters and rights activists alike see as a severe violation of her basic rights.

Benja Apan, 22, a third-year student of engineering at Thammasat University in Bangkok, has been in jail ahead of her trial on charges of royal defamation, a crime punishable with up to 15 years in prison per count in Thailand according to Article 112 of the Criminal Code.

Benja, a leader of a student-led pro-democracy group, was charged after calling for the reform of Thailand’s monarchy at youth-led street rallies last year and earlier this year.

She was recently arrested and an attempt on Oct. 21 by Thanathorn Juangroongruangkit, a widely popular progressive politician, to bail her out was rebuffed by a court, which said that if released from prison Benja could reoffend or flee Thailand to avoid being tried.

Thanathorn, the former leader of the Future Forward Party, a liberal party that was dissolved last year over a legal technicality, offered to be the student’s bail guarantor.

“I was her guarantor today because I don’t want society to forget about Benja and other pro-democracy activists who have traded their freedom for speaking the truth in Thai society,” Thanathorn said in a post on Facebook on Oct. 21.

People like Benja are definitely not a threat to society. Instead, she is the future of the nation and a role model for young people who dare to dream and dare to question [the status quo]

The politician argued that by being denied bail the student was having her rights violated.

“The right to bail is a fundamental right in the judicial process. Benja comes from a modest background, not from a wealthy family, and she dreams of becoming an aerospace engineer. She dreams of continuing her studies until she finishes her Ph.D. so that she can work with a space agency under NASA,” Thanathorn said.

“People like Benja are definitely not a threat to society. Instead, she is the future of the nation and a role model for young people who dare to dream and dare to question [the status quo]. She and all the accused must be granted bail.”

In all, more than 150 predominantly young Thais, including several children, have been charged with lese majeste, or royal defamation, over the past year because of views expressed online and at pro-democracy demonstrations that have been taking place since June last year against Thailand’s military-allied government. 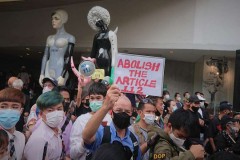 “Today is a dark era of justice when the work of the police, the prosecutors and the courts is distorted, serving power groups whose legitimacy does not come from the people,” Thanathorn said.

Thanathorn, a billionaire businessman turned politician, has himself been charged with lese majeste for criticizing the government’s decision to award a major vaccine-manufacturing contract to a small royally owned pharmaceutical firm with no previous experience in vaccine production.

Last year the popular politician, whose now-defunct party won more than 6 million votes in parliamentary elections in 2019 as Thailand’s third largest party, was barred from politics for 10 years over a legal technicality in a decision that observers and rights advocates said was politically motivated.

Numerous foreign rights experts have decried Thai authorities’ continued use of the controversial lese majeste law to prosecute student activists and others for their political views.

“As Thailand’s protest movement [carries on], the Thai authorities continue to abuse their powers to detain and penalize peaceful protesters,” Amnesty International said in a statement last month.

“The continued support of the protests in Bangkok shows that the people of Thailand value their rights to freedom of expression and peaceful assembly. The Thai government must allow individuals to have their voices heard in peaceful assemblies.

“Amnesty International calls on the authorities to immediately drop all charges against all peaceful protesters, release those still detained and commence meaningful dialogue with demonstrators.”