People buy vegetables as an employee of Bangkok Metropolitan Authority sprays water to clean the Yodpiman Flower Market in Bangkok on Jan. 6 after the government imposed further restrictions due to the recent Covid-19 outbreak. (Photo: AFP)

As Thailand introduces tougher restrictions to limit the spread of a second wave of Covid-19, churches are doing their best to keep services going while ensuring the safety of parishioners.

Assumption Cathedral, the country’s principal Catholic church in Bangkok, has asked worshippers to stop coming to Masses until further notice as they will be conducted online in compliance with a request by authorities to stop large gatherings.

Meanwhile, Bangkok’s Holy Redeemer Church, another large church that was established by Redemptorists in 1949, has announced that it will suspend its Sunday schools on the premises until further notice. Classes will be conducted online.

Many other churches around Thailand have implemented similar policies of moving services online as fears are growing of a new outbreak of the coronavirus in the Southeast Asian nation.

In recent days there have been several hundred new cases of Covid-19 infections in Thailand, which until mid-December appeared to have contained the spread of the virus successfully with no documented local transmissions for several months.

On Jan. 5 alone, authorities recorded 526 new cases with almost all of them being local transmissions, bringing the country’s total to 9,000 documented infections with 65 deaths.

The day before, a record 745 new infections were recorded, which caused significant alarm.

Many of the newly infected people were migrant workers from Myanmar, whom authorities suspect of having brought the virus to Thailand by crossing the border illegally.

Although Thailand’s current daily infection rates pale in comparison with those in many other countries, they are seen by local officials as worrying for fear that the viral spread could soon spiral out of control.

In response, entertainment venues and numerous businesses, including massage parlors, gyms and even public parks, have been shuttered in many urban centers, including the capital. 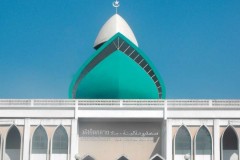 Travel between provinces designated as red zones has also been curtailed.

Meanwhile, the government’s efforts to obtain a sufficient number of doses of vaccine for a population of 70 million remain wanting, with only 2 million doses from China scheduled to be delivered by mid-February.

At the same time, the cost of the renewed lockdown to Thailand’s already ailing economy is expected to be significant, with small and medium-sized businesses particularly hard hit.

“We’ve managed to survive so far, but I am not sure how much longer I can keep my business,” a Thai-Chinese Catholic, who owns a seafood restaurant in eastern Bangkok and asked not to be named, told UCA News.

“I understand that there need to be measures to [contain Covid-19 infections], but businesses like mine receive zero help from the government. Whatever happens, we’re on our own.”

Many local Catholics are hoping for divine assistance to help them through these difficult times.