Thai representatives from the Small Christian Community movement take a photo with parishioners from Hanrim Church on April 26 in Jeju Diocese. (Photo by The Catholic Times of Korea)

Representatives of the Small Christian Communities (SCC) movement in Thailand recently visited Korea's Jeju Island to see how Korean Catholics practice this as part of their faith.

"I heard the Small Christian Communities movement is very active in Korea especially in Jeju Diocese. We came to witness it so we can share it with other Thai Catholics," said Archbishop Louis Chamniern Santisukniran who led the 63-person delegation to Korea on April 24-28.

"The SCC movement could be one of the best alternatives for future ministry and evangelization," Archbishop Santisukniran added.

The delegation consisted of the Catholic Bishops' Conference of Thailand and SCC movement leaders from seven Thai dioceses. They took part in lectures and presentations and visited SCCs in 10 parishes in Jeju Diocese.

Father Atichart Thammawong joined a SCC meeting in Hanrim Church on April 26. "I could see the happy faces of the faithful. They seemed to be sharing their lives and faith centered on the Good News," he said.

Supat Anamnart from Chanthaburi Diocese said, "It was a good chance to share something in common between the SCC movement in Korea and Thailand such as our goals, organization and meeting styles. We felt similar hardships and discussed how to settle problems."

Korea will commemorate the 25th anniversary of the introduction of the SCC movement this year. Thailand introduced it in 2010. 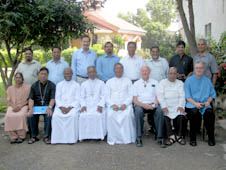 Early Christian blueprint ’will save the Church’

The Church must transform society