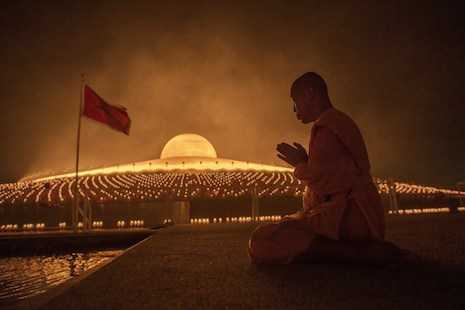 A Buddhist temple at the heart of a bitter corruption scandal in Thailand on Monday agreed to return donations worth around US$20 million in a case that has prompted calls for greater scrutiny over religious institutions in the kingdom.

The Dhammakaya temple, a vast ultra-modern complex near Bangkok considered one of the richest monasteries in Thailand, will repay the funds donated by the former chairman of Klongchan Credit Union Cooperative after he was accused of embezzlement.

"We have agreed to return 684 million baht ($20.7 million) to be paid in six installments between March and August (to the cooperative)," said Sermcheep Samphan, a lawyer for the temple.

He added that, in exchange, the cooperative — a financial institution based on the outskirts of Bangkok — had agreed not to file any criminal charges against the temple, which has denied all knowledge of any unethical sourcing of donations.

The repayments "will come from donations from people who have faith in Dhammakaya", he said.

The scandal has outraged many in the Buddhist-majority nation in recent weeks, raising concerns over how temples raise donations and the commercialization of Buddhism.

The case has also shone a spotlight on the practice of encouraging devotees, who believe in reincarnation, to make donations proportional to the size of good fortune they hope to achieve in their next life — sparking calls for authorities to better regulate religious institutions.

Thai monks have been hit by a series of scandals in recent years including corruption as well as drug use, drinking, gambling and visiting prostitutes.

In September 2013 authorities said they seized nearly $800,000 worth of assets, including a Porsche and a Mercedes-Benz, from a monk who was disrobed for a controversial trip in a private jet. AFP