Despite threats to their freedom and safety, thousands of young Thais carry on with daily anti-government protests 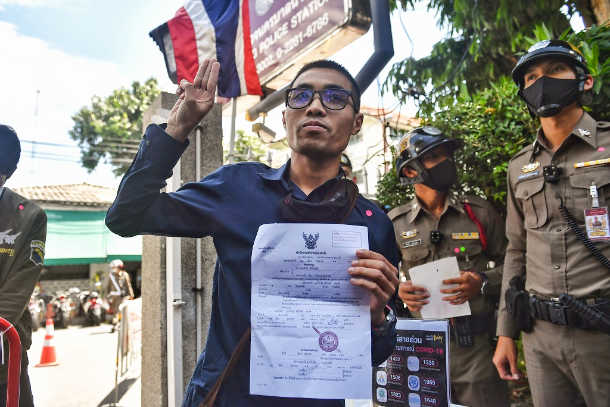 Activist Piyarat Chongthep gives the three-fingered 'Hunger Games' salute as he arrives at Nangleong police station in Bangkok on Aug. 25 to accept charges relating to a protest in front of the Royal Thai Army headquarters last month. (Photo: AFP)

Arnon, a human rights lawyer who has been spearheading anti-government demonstrations in recent weeks, was detained on Aug. 25 for the third time in a month.

“The fact that police keep detaining me shows that the country’s government is resorting to dictatorial methods [to suppress dissent],” Arnon told reporters at the police station where he was being held.

“However, I’m determined to fight on,” he added.

The 35-year-old activist has been charged with committing seditious acts under Article 116 of the Criminal Code for a speech at an anti-government rally at Bangkok’s Thammasat University on Aug. 10 during which he called for a reform of the monarchy along constitutional lines.

Any criticism of the royal family is taboo and against the law in Thailand where those who are found to have “insulted” any of the royals, including past kings and queens, face up to 15 years in prison.

Arnon is also facing charges of having violated an emergency decree that prohibits large gatherings (ostensibly to stop the spread of Covid-19) and the Computer Crime Act owing to his activities online. If convicted of these crimes, the outspoken activist could be sentenced to decades in prison.

Another prominent pro-democracy activist, Panupong Jadnok, was arrested by police on the same charges on Aug. 24.

Panupong came to national prominence when he defied the authorities and staged a one-man protest against Prime Minister Prayut Chan-o-cha during the latter’s visit to a provincial town last month.

Last week several other pro-democracy activists, including university students, were arrested and charged with various crimes, including sedition, before they were released on bail.

Observers say the continued arrests of pro-democracy activists who have been leading mass rallies of mostly young Thais against Prayut and his conservative government indicate that the authorities are stepping up their repression of the freedoms of speech and assembly yet again.

“Peaceful protests and critical expression demanding political reform should not be criminalized.”

Prayut, a former army chief, seized power in May 2014 after overthrowing an elected government in a military coup in a coup-prone nation. He ruled by fiat as the head of a repressive junta for five years until a parliamentary election was held last year, following which Prayut remained in charge.

Although he promised to relinquish his dictatorial powers after the election, rights advocates say that Thailand remains a deeply undemocratic state where dissidents are harassed at will by the authorities and at times subjected to enforced disappearances.

“The government of Prime Minister Gen. Prayut Chan-ocha, in a second term in office after flawed 2019 elections, has done little to address the repressive legacy of military dictatorship,” Human Rights Watch notes.

“Authorities frequently suppress and prosecute critics of the monarchy and the government. Covid-19 measures have become a pretext for censorship and restriction on peaceful rallies. Rights defenders face constant risk, harassment and retaliatory lawsuits from government agencies and private companies.”

Yet despite the threats to their freedom and safety, thousands of young Thais, predominantly high school and university students, have been staging daily protests in Bangkok and elsewhere against the government.

Their demands include that Prayut and his government resign and that undemocratic clauses in the country’s latest constitution, which was drafted by his regime, be amended.