Thai officials check a detained Vietnamese fisherman in Narathiwat province in southern Thailand after their boat was found to be illegally fishing in Thai waters on Aug. 22. (Photo: AFP)

Thai authorities are following through on their pledge to stop migrant workers from crossing illegally into Thailand from neighboring countries, with dozens of migrants from Myanmar among the latest detainees.

Thirty-five migrants from Myanmar who were travelling in two pickup trucks at night were detained on Aug. 28 after the vehicles were stopped for a search at a checkpoint manned by soldiers, police and immigration officers in Kanchanaburi province in central Thailand.

The two drivers, who also came from Myanmar, were also detained. They reportedly told police they had driven the migrant workers illegally across the border from the town of Dawei in southeast Myanmar.

The migrant laborers said they were desperate for work in Thailand, which has largely barred foreign workers from re-entering in recent months in an effort to stop the spread of Covid-19.

They were charged with entering the country illegally and are facing the prospect of being deported back to Myanmar.

Two days prior, 16 migrant workers were arrested at the Thai-Malaysian border in the southern province of Songkhla after entering Thailand illegally, according to local authorities. None of the detainees had proper travel documents, Thai police said.

These latest arrests highlight the plight of migrant workers in Myanmar, hundreds of thousands of whom depend on work in Thailand.

Before the pandemic, up to three million migrant workers from Myanmar were employed in Thailand. Most toil in low-paid menial jobs with little or no job security.

Yet owing to the paucity of jobs back home, laborers from Myanmar continue to seek employment in Thailand despite often grueling work and harrowing conditions.

“I’ve been in Thailand for about 16 or 17 years already since I was around 13. I came with my parents who came here to work,” Tin Tin Htay, 30, from Tanintharyi region, told an online news service in Myanmar. 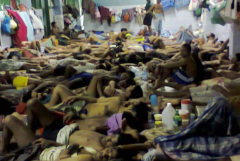 “But I only started working when I turned 18. I’m working in a fish processing factory. I get 300 baht a day with only Sundays off.”

Although hundreds of thousands of migrant workers from Myanmar remain in Thailand, many others returned home earlier this year during a countrywide lockdown. It remains uncertain when they can return to resume work.

Thailand’s Ministry of Public Health has called on local businesses to desist from re-employing migrant workers from Myanmar, citing fears that they could bring the coronavirus to Thailand because of a renewed flare-up of Covid-19 in Myanmar’s Rakhine state.

“Thailand must monitor the situation in Myanmar as well as keeping an eye on international incoming travelers and a number of migrant workers entering Thailand, especially from the bordering countries to prevent illegal immigrants,” Sophon Iamsirithavorn, chief of the ministry’s communicable disease division, said on Aug. 28.

“Although no infected migrants from neighboring countries were found at the moment, we should be cautious at all times to ensure that such a problem will not happen in Thailand in the future.”

The Immigration Bureau on Aug. 27 warned migrant workers that if they entered Thailand illegally while breaching quarantine measures, they would be barred from entering the country permanently.

Border patrol officers have also been stepping up measures to screen vehicles entering Thailand from Myanmar.