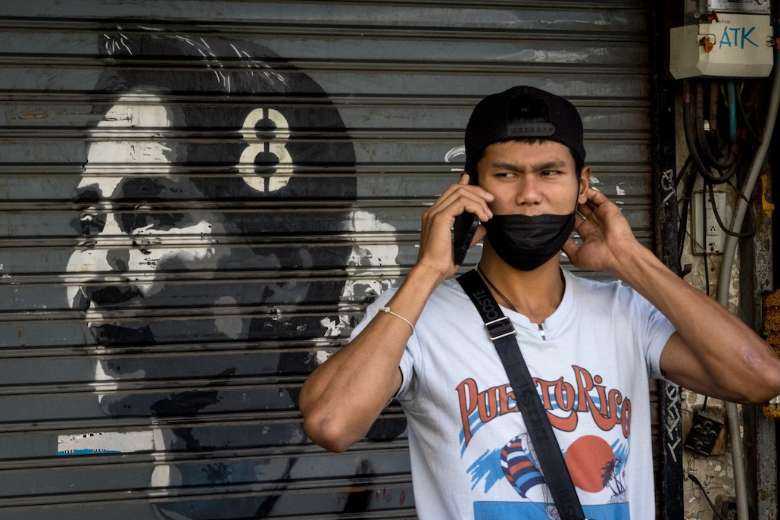 A man talks on his phone beside a piece of street art depicting Myanmar's ousted civilian leader Aung San Suu Kyi outside a restaurant in Bangkok on March 17. (Photo: Jack Taylor/AFP)

Thai authorities have repatriated 145 migrants from Myanmar in the latest move in the Southeast Asian nation aimed at stopping the influx of desperate job seekers and asylum seekers into Thailand.

Thailand’s government said all of the Myanmar nationals, including 60 women, had agreed voluntarily to be returned home on April 10 after being detained previously for crossing the border illegally.

During the publicized repatriation ceremony, Somkiat Sisanet, governor of Rayong province in eastern Thailand where the migrants had been arrested, hosted Ye Lin Htet, an assistant labor attaché from Myanmar, while local labor and security officials also attended.

Many Thais have been skeptical about the reported willingness of the migrants to be repatriated.

“Did they volunteer or were they given an ultimatum: ‘Stay in Thailand and go to jail or return to Myanmar and remain free’? The fact that the Thai authorities made a big show makes me think it was the latter,” one commenter noted.

Since February last year when the military in Myanmar seized power in a putsch, hundreds of thousands of migrants desperate for work are believed to have crossed into Thailand from the conflict-torn nation even as Thai authorities have stepped up their efforts to stop them.

“When they told us to go back, we cried and explained why we can’t go back home. We want to go back but we have no house”

Local authorities have deported tens of thousands of migrants from Myanmar over the last year for crossing the border illegally despite calls by rights groups on Thailand’s government to ensure that no genuine asylum seekers would be returned to Myanmar where they might face threats to their safety and well-being.

Yet the same weekend that the 145 nationals from Myanmar were deported, scores of others entered Thailand illegally, according to official accounts.

In the western province of Kanchanaburi alone, as many as 50 migrants, including 20 women, were detained for crossing the border illegally with the help of people smugglers. They had paid up to 20,000 baht (US$600) per person to smugglers.

Some of the others had agreed to pay them from their salaries once they started working in Thailand in a type of arrangement that often sees desperate migrants end up in what is effectively bonded slavery.

It has long been suspected that many Thai officials have colluded with people smuggling gangs and Thai police have just launched an investigation into a report by the Associated Press that some officials in Tak province, which borders Kayin state in Myanmar, promised not to deport migrants in exchange for a payment of 350 baht from each.

Reportedly, the officials also charged refugees who had crossed into Thailand to escape armed conflict in their homeland between state security forces and a rebel army.

Once the migrants paid the fee, they were issued a “police card,” which was supposed to protect them from arrest and deportation. However, despite paying for such cards, asylum seekers were sent back across the border just the same.

“When they told us to go back, we cried and explained why we can’t go back home,” said an asylum seeker sheltering in a flimsy tent with her husband and two young children at a river that divides the two countries. “We want to go back but we have no house.”