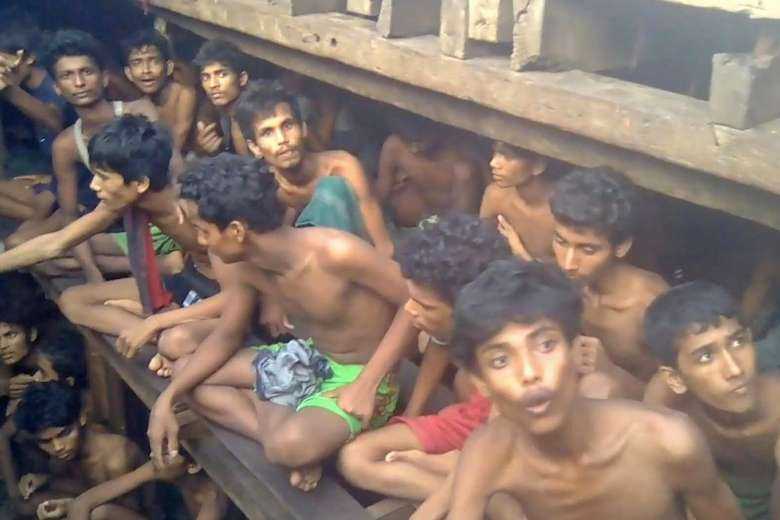 Rohingya refugees in a boat in Chakmarkul, Bangladesh, on Aug. 26, 2020. Myanmar smugglers are seen mercilessly beating refugees in a graphic video obtained by AFP that shows rarely seen images from the front lines of human trafficking. (Photo: AFP/Handout)

Almost seven years after he fled to Malaysia to evade arrest, a Thai man accused of trafficking Rohingya refugees was apprehended in a southern Thai province, according to officials.

Chamsudin Tordin, who had worked in Malaysia as a member of a fishing crew, was detained after he re-entered Thailand last weekend after being on the run since May 2014, officials said.

Chamsudin, 38, who stands accused of having been involved in the smuggling of Rohingya migrants from Myanmar to Malaysia via Thailand, has been charged with several crimes such as trafficking minors under 15, detaining people against their will and colluding with abductors to demand ransom from victims.

The arrest is a rare success story in Thai authorities’ stated intention of going after human traffickers in order to improve the image of the country, which has been named by the US Department of State as a major transit hub for people smugglers and human traffickers.

Over the past year alone, hundreds of thousands of migrants from Myanmar are believed to have entered Thailand illegally by the help of people-smuggling networks.

The migrants are routinely required to pay anywhere between 17,000 baht (US$510) and 25,000 baht ($750) to smugglers in exchange for safe passage into Thailand and jobs upon arrival.

Last weekend alone, scores of migrants from Myanmar were detained by Thai authorities for entering the country illegally.

In one incident on Jan. 15, 43 Myanmar nationals were arrested in the western Thai province of Kanchanburi, which borders Myanmar, as they were hiding in a tapioca plantation and waiting for transport to be taken elsewhere.

Three Thai men who allegedly lent assistance to the migrants were also detained.

The same day, another 33 migrants were detained in the same province for crossing the border illegally by the help of smugglers.

All the migrants who enter illegally from Myanmar are deported after being detained.

Although Thai authorities continue to detain and deport migrants who flee political persecution and economic hardships in Myanmar, a country ruled by a repressive junta, they appear to have had less success in impeding the work of cross-border smuggling networks.

In addition, experts have said that many migrants from Myanmar who are smuggled into Thailand end up being exploited in various ways once they find employment in such notoriously exploitative sectors as fishing and food processing.

“Despite widespread reports that forced labor was prevalent among migrant workers in many industries in Thailand, the government identified a low number of labor trafficking victims compared to the scope of the problem, officials often lacked an understanding of labor trafficking, and the government lacked standard procedures for labor inspectors to refer potential cases to law enforcement,” the US State Department said about Thailand in its “2021 Trafficking in Persons Report.”

“Thai authorities have never reported identifying a victim of labor trafficking as a result of fishing vessel inspections conducted at ports. The government’s provision of services to victims remained inadequate, and some victims residing in government shelters lacked freedom of movement. Corruption and official complicity continued to impede anti-trafficking efforts.”