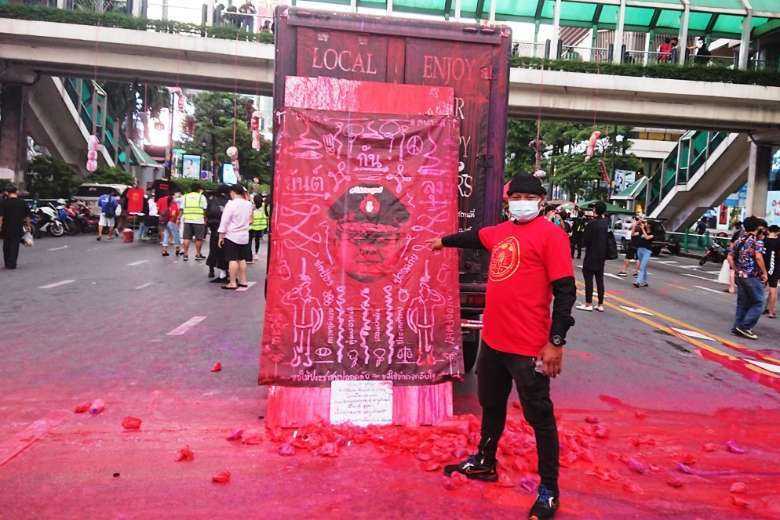 A Thai protester points an accusatory finger at an image of Prime Minister Prayut Chan-o-cha at a pro-democracy rally in Bangkok on Sept. 3. (Photo: UCA News)

Thailand’s anti-government protesters have called on Prime Minister Prayut Chan-o-cha to resign after the beleaguered premier survived a no-confidence motion in parliament on Sept. 4

Prayut’s allies continue to have an upper hand in the House of Representatives but many observers regard the current electoral setup, put in place after the 2014 coup, as hopelessly favoring his regime.

“We do not accept [the result of the no-confidence vote] and we will not give up,” said Nattawut Saikuar, leader of the red shirt movement, in a post on social media.

“The longer Prayut stays in charge, the worse the country will get. But it isn’t just him. This entire government must go,” a young protester told UCA News during mass protests in Bangkok over the weekend by university students as well as supporters of the red shirt movement.

Police officers in riot gear watched from the perimeters of the rallies the street fair-like atmospheres protesters created with their fiery speeches, street food and live musical performances.

During a rally at the Ratchaprasong intersection in central Bangkok on Sept. 3, protesters hung mock cadavers in body bags from a pedestrian bridge as a reminder of the thousands of deaths in the country due to an ongoing Covid-19 outbreak.

Both Thaksin and Yingluck are in self-imposed exile abroad, having fled corruption charges that their supporters say were politically motivated

“We’ll never forget what happened here,” a red shirt demonstrator said, referring to a massacre of scores of unarmed red shirt protesters by the Royal Thai Army in 2010 at this very site.

The red shirt movement had come into being after a military coup in 2006 ousted the then prime minister Thaksin Shinawatra, a controversial politician whose policies are said to have helped farmers and low-income earners in the country’s rural northeast.

Prayut, who was army chief during the 2010 massacre, went on to seize power as the head of a junta in another coup in 2014, ousting another elected government led by Yingluck Shinawatra, Thaksin’s sister.

Both Thaksin and Yingluck are in self-imposed exile abroad, having fled corruption charges that their supporters say were politically motivated. But the demonstrators have vowed to carry on staging mass protests daily to keep the pressure on Prayut.

Prayut has also been facing mounting criticism in recent months over his administration’s handling of a raging outbreak of Covid-19, which has claimed more than 12,500 lives and infected 1.3 million people, the vast majority of them over the past few months.

At the same time, government-imposed lockdowns have proved economically ruinous even as they have failed to contain the outbreak, which has been exacerbated by the slow rate of a vaccine rollout.

For over a year, student-led pro-democracy protests have been taking place regularly on the streets of Bangkok and other cities with vociferous demands for sweeping political reforms.

After a lull during the peak of the Covid-19 outbreak in June and July, large groups of demonstrators returned to the streets of Bangkok in August, defying an emergency decree that prohibited all gatherings.

Prayut and his political allies have been resorting to a combination of violent police crackdowns and judicial methods. Many protesters have been injured in recent weeks by rubber bullets and water jets while scores have been detained and charged with various crimes.

“We are concerned we might get hurt [during a police crackdown], but we’ll have to take a stance,” a protester, who studies at a university in Bangkok, told UCA News.

“They [this government] took away our freedoms and we want them back,” he said.