Ailing national carrier taps into many Thais' penchant for superstition Devotees pray to Buddha statues in a cave in the Chiang Dao caves complex, which goes on for more than 10km and contains shrines, statues and Buddha images, located 70km north of Chiang Mai. (Photo: AFP)

Thailand’s beleaguered national carrier is seeking to revive its financial fortunes — by tapping into many Thais’ penchant for spirituality and superstition.

Thai Airways International (THAI) is selling places for its special pilgrimage flight, which the state-owned company says will traverse “the path of faith through 99 holy places” around 32 provinces, according to its sales pitch.

Billed “THAI Magical Flying Experience,” the flight will take off from Bangkok’s Suvarnabhumi airport on Nov. 30 and fly over 99 sacred sites in eastern and southern Thailand before returning to the airport without landing anywhere.

“There will be no landing during the flight and passengers will receive positive energy from chanting while on board,” said Wiwat Piyawiroj, executive vice-president for commercial operations.

The spiritual aerial flyover will take three hours and a seat on it will cost nearly US$300 in economy class and $930 in business class. The airline promises that by flying over sacred sites while immersed in prayer passengers will be able to “absorb positive energy” and improve their karmic prospects.

“Celebrity astrologist Katha Chinbanchorn will be on board to lead everyone through chants as they fly by the temples and shrines. Thai Airways’ famous food will also be served along with a prayer book and amulet,” a local newspaper explained.

Mired in allegations of mismanagement and corruption, THAI has been facing the prospect of bankruptcy with liabilities in excess of $1 billion following the grounding of all its planes for months during the Covid-19 pandemic, which has dealt a massive blow to Thailand’s tourism industry.

Although interest in the special flight appears strong, based on comments on social media, some prospective passengers seem to be skeptical about the benefits of flying high in the sky above Buddhist shrines and temples down on the ground.

“Will I be able to view sacred shrines from the air or will the plane be flying too high for that?” one man asked the airline in a message on Facebook.

Other commenters pooh-poohed the very idea of the pilgrimage flight, saying it was disrespectful of the airline to take advantage of people’s beliefs in the supernatural by selling them a journey of dubious spiritual worth. 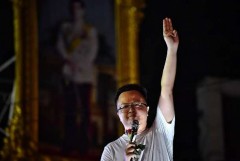 The special spiritual flight is scheduled to include flying over a shrine in the southern province of Nakhon Si Thammarat, where a gilded statue of a 10-year-old boy known as Ai Khai (Egg Boy) has been drawing legions of Thai Buddhists from all around the country.

Said to be a representation of a temple boy who lived in the 17th century and was allegedly a disciple of a venerated Buddhist monk before drowning in a river at age 10, Ai Khai is believed to grant wishes to people who petition him.

Thai Buddhists have been flocking to Wat Chedi, where the statue is on display, in the hopes of winning the lottery or gaining other favors after praying to Ai Khai and donating food, toys like slingshots and other votive offerings to him.

“During the past few months, the temple has been packed with worshippers every day, particularly during long holiday periods. It is estimated to bring in more than 300,000 visitors each month, delivering a boost to the local economy and tourism,” the Bangkok Post reported in September.

Thanks to a nationwide craze about the allegedly miraculous powers of Ai Khai, the southern province has seen its tourism revenue skyrocket even as tourism across much of the rest of Thailand has hit rock bottom.

Daily flights to the province have more than doubled from 14 to over 30 in recent months and many hotels have been fully booked for days and weeks ahead.

Critics have accused the staff at Wat Chedi and local officials of commercializing Buddhism by preying on gullible people with the cult of Ai Khai. They have compared it to another craze that took place in the same province years ago and involved special amulets called Jatukham Ramathep, which were mass-produced at a local temple.

The amulets were in extremely high demand for a while in the belief that their wearers would get lucky financially, such as by winning the lottery.

In response, Korakot Tetiranon, chairman of the province’s chamber of commerce, insisted that the promotion of the putative magical powers of Ai Khai is not against normative Buddhist practices.

“This is not an act of commercializing Buddhism. The temple has also pursued other good causes, too. This is different from the Jatukham fever, which saw no control over the large-scale production of the amulets,” he said.

“At Wat Chedi, the temple management has a well-defined plan to handle the temple's assets. The original Ai Khai amulets can be obtained only at the temple and those seeking them must register and are only entitled to one amulet each.”

Not everyone is buying this argument, however. One of the sceptics is Phra Maha Paiwan Warawanno, a Buddhist monk who has built up a large following on social media with his no-nonsense and rationalistic views on Buddhism and Thai spirituality.

“Practices like this have no basis in the actual teachings of the Buddha,” Phra Maha Paiwan told a UCA News reporter. “The Buddha spoke out against [superstitions] that aren’t grounded in reality.”