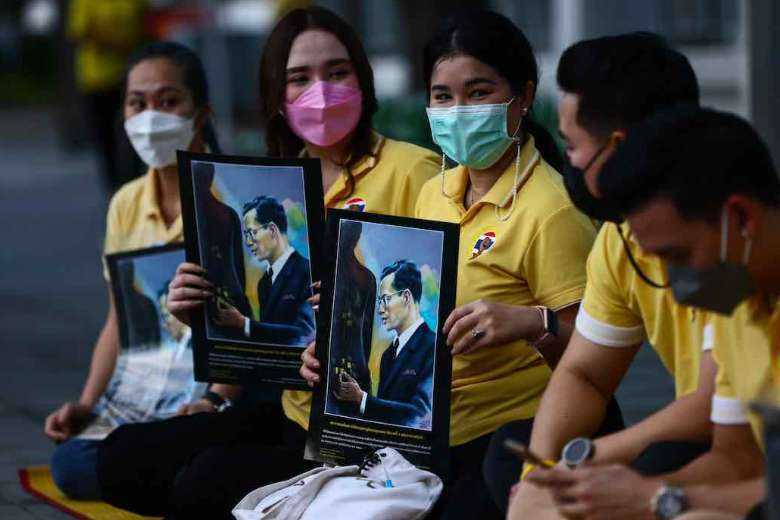 Royalist supporters hold up paintings of the late King Bhumibol Adulyadej while waiting for the motorcade of Thailand's King Maha Vajiralongkorn to pass in Bangkok on October 13, 2021, as the royals head to take part in a merit-making ceremony on the fifth anniversary of the passing of the late king. (Photo by Jack TAYLOR/ AFP)

A young woman held in prison on charges of insulting Thailand’s monarchy is into her fourth week of a hunger strike to protest Thai authorities’ ongoing crackdown on dissidents.

The 20-year-old activist, Tantawan Tuatulanon, is being held in pre-trial detention at a Bangkok prison after being charged with royal defamation, a crime punishable by up to 15 years in prison per charge.

The case, rights advocates say, is yet another example of the “judicial harassment” of student activists demanding reform of what they see as Thailand’s ossified political culture.

Tantawan, who has been charged twice for criticizing royal motorcades, which often cause traffic jams in Bangkok, went on a hunger strike on April 20 after she was denied bail and imprisoned.

The young activist is in a precarious condition with low energy and low blood sugar levels and there are concerns about her health, according to Poonsuk Poonsukcharoen, an attorney with Thai Lawyers for Human Rights who represents her pro bono.

“She’s in a weak state right now. She insists she will continue her hunger strike indefinitely to demand her right to bail,” Poonsuk said.

Tantawan is only one of several young activists who have been denied bail and imprisoned in recent weeks on charges of royal defamation, also known as lese majeste.

The young woman faces the prospect of being sentenced to prison for decades as she has been charged with numerous crimes in addition to royal defamation. However, she remains convinced about the justness of her case, Poonsuk said.

“In this place [prison], I have to adjust a lot. Sometimes I feel down and discouraged, even though I have already steeled myself to face this outcome,” the lawyer quoted the young woman as saying.

“At night, I can’t sleep. When I dream, I also dream about being in prison. But I certainly won’t give up. When I’m freed, I will carry on fighting, and if I could turn back time, I would do the same,” Tantawan was quoted as saying.

In a recent statement about the charges against the young woman and her pre-trial imprisonment, the International Federation for Human Rights has decried her “arbitrary detention and judicial harassment” at the hands of Thai authorities.

“The [federation] expresses its deepest concern about the arbitrary detention and judicial harassment of Tantawan Tuatulanon, which seem to be only aimed at punishing her for her peaceful human rights activities and the exercise of her rights to freedom of expression and freedom of peaceful assembly,” the rights group said.

It has also called on Thai authorities “to immediately and unconditionally release Tantawan Tuatulanon and to put an end to the judicial harassment against her and all other human rights defenders in the country.”

Since November 2020, some 190 predominantly young pro-democracy activists, including children, have been charged with royal defamation, many of them numerous times.

Despite repeated calls by rights groups to stop criminalizing political dissent, Thai authorities continue charging activists with royal defamation and other crimes, arguing that any criticism of the monarchy is a threat to national security.

Student activists have been demanding sweeping political reforms in Thailand, whose military-dominated government seized power in a coup in 2014. Among their demands is reform of the monarchy, which they accuse of wielding political influence.