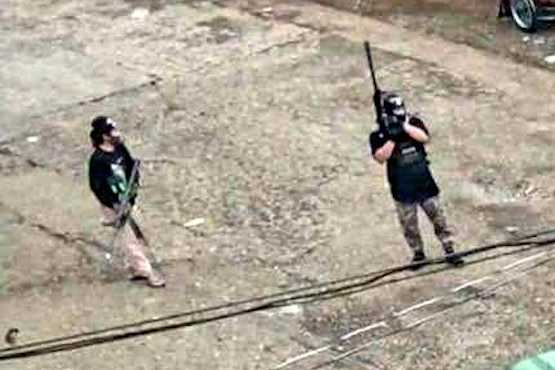 Armed men claiming allegiance to the so-called Islamic State enter the southern Philippine city of Marawi on May 23, burning buildings and taking hostages, including a Catholic priest. (Handout photo from the Philippine Armed Forces)

Gunmen claiming to have links with international terror group Islamic State threatened to kill hostages, including a Catholic priest, who were taken from the southern Philippine city of Marawi on May 23.

"[The terrorists] have threatened to kill the hostages if government forces pitted against them are not recalled," said Archbishop Socrates Villegas, president of the Philippine bishops' conference.

"As the government forces ensure that the law is upheld, we beg of them to make the safety of the hostages a primordial consideration," he added.

Archbishop Villegas said that at the time of his capture, Father Teresito Suganob, vicar of the Prelature of Marawi, "was in the performance of his ministry as a priest."

"He was not a combatant. He was not bearing arms. He was a threat to none. His capture and that of his companions violates every norm of civilized conflict," said Archbishop Villegas.

Fighters of the Maute group, which has vowed allegiance to the Islamic State, earlier burned several buildings, including Marawi's Catholic cathedral, a Protestant school, and the city's jail.

Bishop Edwin Dela Pena of Marawi confirmed reports that the attackers took Father Suganob, several of the prelature's staff, and some churchgoers.

The prelate said he received a call from "a member of Islamic State" who demanded a "unilateral ceasefire" in exchange for the life of the priest and the other hostages.

"They want a ceasefire and for the military to give them access out of Marawi," said Bishop Dela Pena. "Otherwise they will kill the hostages," he added.

The prelate said the call was made using the phone of his secretary, who was also taken hostage when the gunmen forced their way into the bishop's residence.

The bishop said he was able talk with Father Suganob because the gunmen wanted "to make sure that their demands were made clear with me."

Bishop Dela Pena said he was in the outskirts of the city when the attack happened and only learned that the cathedral was burned after midnight.

"I was supposed to go to Marawi yesterday but I was asked to cancel my trip because of the siege," said the bishop.

The prelate said the gunmen have used the hostages as "human shields" as fighting continued with security forces on May 24.

President Rodrigo Duterte declared martial law lasting 60 days across the whole of Mindanao to address the threat of terrorism.

"I'll be harsh," said Duterte. "I have to do it to preserve the Republic of the Philippines," said the president even as he assured Filipinos "not to be too scared."