The nuncio's address to the Sixth Committee of the U.N. General Assembly called for absolute condemnation of terrorists 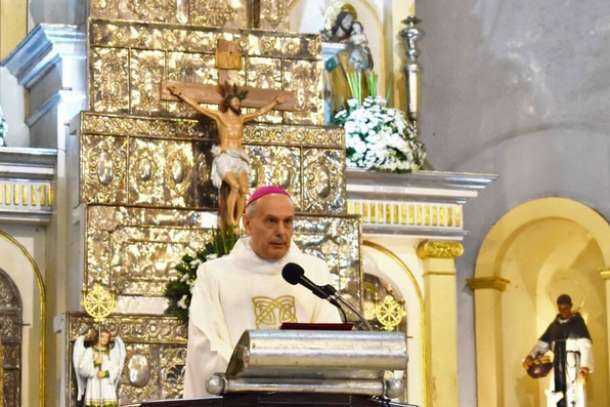 Archbishop Gabriele Caccia said in a statement to a committee of the U.N. General Assembly on Oct. 12 that terrorists' "utter disdain for life and fundamental freedoms, their unspeakable crimes against women and children and the savage barbarity of their acts of destruction call for absolute condemnation."

"No ideological, political, philosophical, racial, ethnic, or religious reasons can ever justify or excuse terrorism," Archbishop Caccia told the committee that considers legal questions within the General Assembly.

The archbishop called for multilateral cooperation based on the four pillars of the Global Counter-Terrorism Strategy to defeat terrorist acts.

He expressed concern that at times anti-terrorism measures hinder the delivery of humanitarian aid to suffering civilians.

"While the concern that aid does not fall into the hands of terrorists themselves is indeed legitimate, those measures should not become yet another heavy burden for the civilian population," he said.

The archbishop also urged world leaders to give greater attention to solutions that address "the root causes of terrorism," such as the lack of education for youth, severe economic disparity, the marginalization of individuals or groups, and disrespect for diversity and inclusiveness.

Any counterterrorism steps "must involve local communities, local governments, and grassroots organizations" because they play important roles in preventing "youth from being radicalized," he added.

In concluding his statement, Archbishop Caccia suggested greater efforts are needed to foster tolerance and inclusivity toward minority groups "through the robust promotion of the right to freedom of conscience, religion and belief" as called for in the Universal Declaration of Human Rights. Failure to do so, he said, may lead to violence and extremism.

Archbishop Caccia also delivered a statement during a meeting of the Special Political and Decolonization Committee of the General Assembly, which discusses issues on a variety of fronts, including peacekeeping, the effects of atomic radiation and peaceful uses of outer space.

The statement to the committee also addressed the growing difficulties facing Palestinian refugees because of the coronavirus pandemic.

These refugees, he said, have to deal with increasingly crowded living conditions, restricted income, chronic disease and constrained mobility, which leads to their greater vulnerability to the coronavirus and a diminishing resiliency to the disease.

The diplomat cited the destruction of the port and a large part of Beirut by the Aug. 4 ammonium nitrate explosion as impeding the delivery of aid and straining the ability to provide medical care to refugees.

He also expressed concern over reports from Syria estimating that two-thirds of the Palestinian refugees in the country have been displaced at least once since the start of the country's civil war in 2011, worsening their "already hazardous life conditions."

While commending the work of the U.N. Relief and Works Agency for Palestinian Refugees in the Near East, which has challenging funding issues, Archbishop Caccia called for greater support for Palestinian refugees as the pandemic's grip continues.

He also reiterated the Holy See's appeal for a "directly negotiated peace between the Palestinian and Israeli people" to resolve the refugees' plight.

In addition, Archbishop Caccia credited the technological advances that allowed for greater satellite assistance in global navigation, communication and weather monitoring, but cautioned that an international framework must be developed to address "potentially conflicting uses of outer space."

"Failure to do so will lead to clashes that none of us seeks," he said.

The archbishop expressed concern about the "the dangerous accumulation of space debris," saying it endangers other satellites and hinders the work of astronomers.

In an earlier statement to a General Assembly committee addressing social, humanitarian and cultural issues, the archbishop addressed the importance of protecting human rights in a time of the pandemic.

During the Oct. 6 session, he touched on issues of religious freedom, the protection of rights of people accused of a crime, social development, the advancement of women, promotion and protection of children's rights, the rights of indigenous people and racism, intolerance and xenophobia while citing the teaching of Pope Francis in his encyclicals.

Archbishop Caccia voiced the Holy See's particular concern for "maneuvers to suppress the place of religion in public life."

Such action, the archbishop explained, emerges "from a reductive notion of the human person, but it also stifles the development of authentic peace and justice."

"Freedom of religion is an inalienable and universal human right, as the Universal Declaration of Human Rights attests. Freedom of religion has never been and can never be a 'concession' or 'privilege' -- to be retracted at will -- by the state," he explained.

"Respect for human rights and the guarantees they provide are measures of the common good," the diplomat said. "Indeed, the promotion of human rights remains the most effective strategy to eliminate inequalities between countries and social groups and to increase security. Instead, approaches that create a hierarchy of human rights by relativizing human dignity only lead to grave inequality and injustice."

This tendency" is particularly apparent in the refusal to recognize the inherent value and dignity of each and every human life at every stage," noted. "Just as there is no right to abortion, there is also no right to euthanasia."

He concluded by calling on all nations during and after the pandemic "to see to it that the elementary conditions needed to ensure dignified and free life exist. This includes protecting and putting into practice the fundamental rights of all persons."