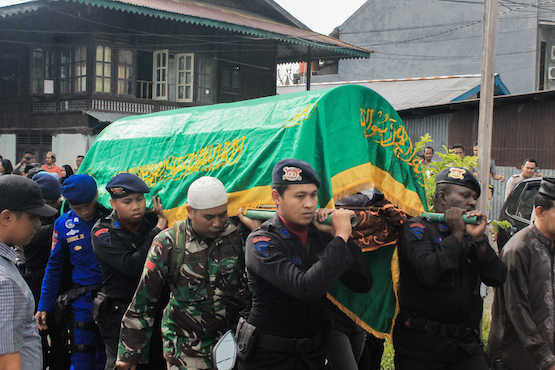 Police and military personnel carry the coffin of a colleague during his funeral in Timika, Papua on Nov. 15, 2017. The Indonesian policeman was shot dead near a giant U.S.-owned copper and gold mine, authorities said. The killing comes as police and armed separatists are locked in a standoff near Freeport-McMoRan's mine, with both sides blaming each other for what police have claimed is a hostage crisis. (Photo by Jimi Rahadat/AFP)

Fears of civilians being caught in the middle of potential clashes between Papuan pro-independence fighters and Indonesian security forces grew dramatically over the past week after rebels sealed off several villages near a controversial mine and allegedly shot dead a police officer.

Authorities said a rebel group linked to the Free Papua Movement — the West Papuan National Liberation Army — shot dead the policeman and wounded two others on Nov. 15 in an area seized by rebels in Timika district, not far from a mine operated by the US owned gold mining firm, Freeport McMoRan Inc.

“The officer was shot in the back and died at the scene. Two other policemen were injured,” Papua police spokesman, Ahmad Mustofa Kamal, told reporters.

The shooting occurred days after authorities accused the rebels of taking around 1,300 civilians from several villages in Timika district hostage and that people were being prevented from leaving the area.

Rebel leader, Hendrik Wanmang, however denied the allegation saying the group was targeting the mine’s activities, not civilians.

“We are not targeting people in the villages. But since they are located near the mine, they are affected,” Wanmang said.

He said the mine was being used by the Indonesian government to exploit Papua and its natural resources.

Papua has been subjected to a low-level insurgency for decades after the province was incorporated into Indonesia in 1969.

Bishop John Philip Saklil of Timika voiced his concern over the standoff and called on all parties to commit to dialogue and not let the situation descend into violence.

He also denied police claims people were being held hostage but that their movements in and out of the villages were being restricted. He urged the rebels to reopen the road connecting the villages.

“There is only one access road out of these villages. As it is closed people cannot move freely anywhere because the area is mountainous and steep,” he told ucanews.com on Nov 14.

Although the rebels have allowed food supplies in, the prelate said if the access road is closed for long time, people will suffer from food shortages.

Obeth Jawame, a resident from one of the villages said residents were staying at home for fear of retaliation from law enforcers.

He also said villagers were not being held captive.

The rebel group has assured the safety of indigenous Papuans and migrants working at the Freeport mine, he said.

Father John Djonga, an activist priest in Papua who claimed to have communicated with the pro-independence group told ucanews.com, that they want to negotiate.

"The government should immediately start dialogue," he said.

Indonesia’s Vice President, Jusuf Kalla, promised to prioritize dialogue rather than use force to end the standoff to avoid casualties. The government would only take firm action if dialogue fails, he said.