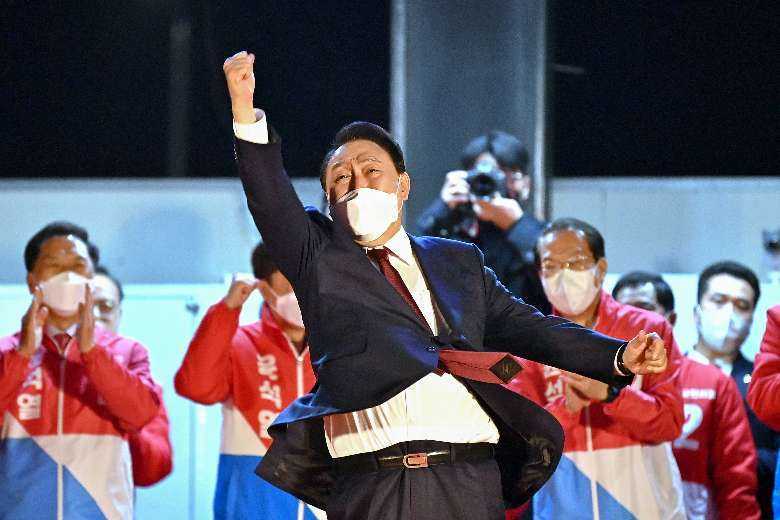 South Korea's president-elect Yoon Suk-yeol gestures to his supporters as he is congratulated outside the party headquarters in Seoul on March 10. (Photo: Jung Yeon-je/AFP)

South Korea is all set to inaugurate conservative and confrontational president Yoon Suk-yeol on May 10, giving rise to speculation about the redeployment and use of nuclear weapons on the Korean Peninsula.

Dealing a severe blow to the decades-old unification movement, both South and North Korea are talking of nuclear annihilation if a flare-up occurs.

South Korean media said the upcoming spring military exercise involving the US and South Korea could include nuclear bombers for the first time in nearly five years.

Kim Yo-jong, the powerful sister of the hermit nation’s leader Kim Jong-un, said that if South Korea chooses a pre-emptive strike, then the North’s nuclear forces will be deployed to resist the attack.

Her warning, while not unusual, sheds light on the rising tensions on the peninsula amid speculation that the communist nation is set to carry out a nuclear test later this month.

Thirty-four-year-old Yo-jong, who holds several senior positions in the government and the ruling party, predicted “total destruction and ruin” for the South Korean military, if provoked.

Catholic Moon met the North Korean leader three times in 2018 and was instrumental in two rounds of the Trump-Kim summit, which ended in 2019 due to disagreements on sanctions relief

If the South Korean military tries to capture even an inch of North Korean territory, the North's nuclear combat force will have to carry out its duty, she said.

On its part, North Korea is trying to exert pressure on the South just weeks before the conservative Yoon Suk-yeol replaces the liberal Moon Jae-in, who at times showed willingness for a rapprochement with Pyongyang.

Catholic Moon met the North Korean leader three times in 2018 and was instrumental in two rounds of the Trump-Kim summit, which ended in 2019 due to disagreements on sanctions relief. The current Biden administration has shown little interest in reviving the denuclearization talks.

Yoon appears keen on strengthening the South’s defense against North Korean nuclear attacks. He is knocking on US doors for the lethal weapon but has not ruled out a return to dialogue with Kim so far.

The deployment of US bombers, aircraft carriers and nuclear submarines was one of Yoon’s election planks. He also hinted at normalizing the joint military drills with the US that were scaled back during Moon’s tenure to placate North Korea.

North Korea has long rebuked the joint military exercises, forcing its rival to shun the use of major weapons and instead focus on computer simulations.

Yoon’s foreign policy and security advisers, led by four-term lawmaker Park Jin, were in the US on April 4 to discuss an early summit with Joe Biden. Jin’s name is mentioned as a strong candidate to be foreign minister, along with that of Cho Tae-yong, a member of Yoon's conservative People Power Party (PPP), who was also part of the delegation to the US.

But Jin, heading a seven-member delegation, ducked the question when asked about plans for regular spring exercises, which domestic media said could include nuclear arms for the first time in nearly five years.

"Deploying the strategic assets is an important element of reinforcing the extended deterrence, and the issue naturally came up during the discussions," Jin told reporters.

When asked whether the US-supported deployment of nuclear weapons in South Korea, a White House official said that both sides "discussed generally" the US defense commitments and did not elaborate further.

The delegation invited Biden to pay a visit to Seoul when he travels to Asia for the meeting of the Quad, officially the Quadrilateral Security Dialogue, which includes Japan, Australia and India, all strong US allies in Asia.

As nuclear annihilation has become the preferred form of mutual destruction, giving peace a chance on the Korean Peninsula is a tough task.

The Church in Korea has implemented peace and cultural awareness initiatives like the Peace Pilgrimage, which allows young people from all over the world to visit the demilitarized zone

Reconciliation and the reunification of the peninsula have been one of the priorities of the Korean Catholic Church and the Vatican.

Under Carmelite Archbishop Peter Chung Soon-taick of Seoul, who is also apostolic administrator of Pyongyang, the Church has initiated humanitarian aid to North Korea through various channels, including helping North Korean refugees in South Korea.

South Korean Catholics have kept alive the desire for unity and for the past 26 years a Mass has been celebrated every Tuesday in Seoul Cathedral with the intention of reconciliation and to express closeness to Christians in North Korea.

The Church in Korea has implemented peace and cultural awareness initiatives like the Peace Pilgrimage, which allows young people from all over the world to visit the demilitarized zone.

During a meeting between Korean Unification Minister Lee In-young and Archbishop Soon-taick on Jan. 19, the Korean government asked the Church "to continue to play an important role in achieving peace between the two Koreas.”

The Vatican and Pope Francis have made many appeals for rapprochement between the neighbors.

When the outgoing South Korean president relayed a verbal invitation from the hermit nation’s leader to Pope Francis for a papal visit to North Korea in 2018, the Vatican said it would consider it under certain norms if it helped the cause of peace.

A papal trip to North Korea could initiate closer talks that could put an end to nuclear threats on the Korean Peninsula forever.