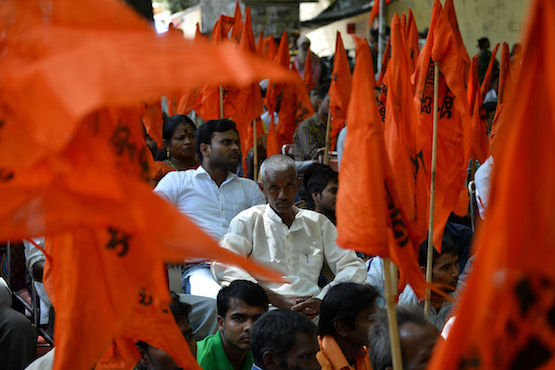 Wider sectarian violence is feared in India’s Rajasthan state after airing of a video showing a Hindu hacking a Muslim man accused of courting Hindu women then burning him to death.

Police have identified the victim as 50-year-old Mohammed Afrazul and arrested Shambhu Lal Regar, who is accused of committing the crime and then posting the video on social media.

The footage, which went viral, shows the accused asking "all Hindu sisters not to fall into the trap of "love jihad."

This is a term hardline Hindu groups use to denote the alleged practice of young Muslim men courting and marrying Hindu women with the aim of converting them.

The accused was also seen blaming Muslims for destroying the Indian economy by producing counterfeit currency and undermining Hindu history through subversive films.

A further allegation was that Muslims were selling drugs to Hindu youths.

Since being arrested, the accused had been interrogated, police officer Manoj Kumar of Rajnagar, where the crime occurred, told the media.

The state is run by the pro-Hindu Bharatiya Janata Party (BJP), which also governs nationally.

State authorities have put police on high alert to ward off any further strife in a region with a history of Hindu-Muslim riots, particularly after British India was divided on religious lines into India and Pakistan in 1947.

The BJP now rules 18 of India’s 29 states and most have reported violent attacks on religious minorities, which rights groups say are often carried out with impunity. This is the fourth sectarian killing of a Muslim in the past nine months in Rajasthan state, said Kavita Srivastava, president of the rights group People's Union of Civil Liberties.

There were killings by so-called "cow vigilantes" in April and June of men accused of transporting cattle for slaughter. Orthodox Hindus consider the cow a sacred animal.

Another Muslim was beaten to death when he opposed the photographing of women defecating in the open as part of the government's "clean India" campaign.

Bishop Theodore Mascarenhas, secretary-general of the Catholic Bishops Conference of India, called for government action to protect minorities, including Muslims and Christians.

The bishop sought strict measures against what he labeled as hate crimes.