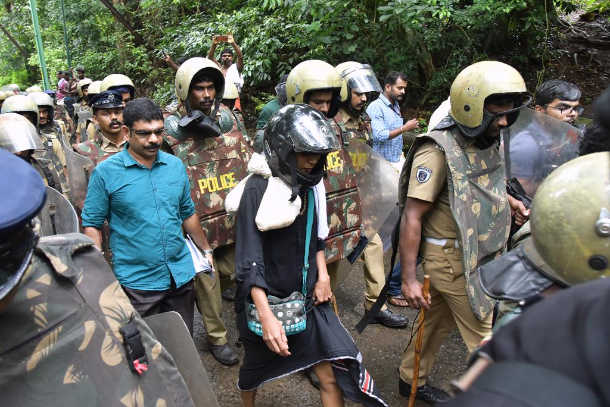 Indian activist Rehana Fatima (center) walks with police wearing protective gear near Sabarimala temple in India's southern Kerala state on Oct. 19 as she was denied entry to the temple grounds by Hindu protesters. (Photo by AFP)

The decision of India's top court to allow women of reproductive age to enter a Hindu temple in Kerala has snowballed into massive street protests and started a debate on gender inequality in other religions including Christianity and Islam.

Thousands of Hindus, mostly women, continue to protest on the streets of the southern state against allowing women aged 10-50 to enter the 12th century Sabarimala, a popular hilltop temple.

Protesters say the ban on women is among centuries-old customs and rituals associated with deity Ayyappa, worshiped as a celibate. The presence of women of menstrual age will render the deity irrelevant because the ban is ritually linked to his celibacy.

The Supreme Court in its Sept. 28 ruling said "the attribute of devotion to divinity cannot be subjected to the rigidity and stereotypes of gender." The ban was an expression of gender discrimination, it said.

Tension began to escalate after the state government, led by left-wing parties, announced its commitment to implement the order. The state assured women that they would receive police assistance to visit the temple that annually attracts some 5 million pilgrims.

Indira Jatheesh, a 35-year-old Hindu woman who was part of the protest in Ernakulum district, told ucanews.com that she will not go to the temple despite the court order.

Most Hindu women would not go there, she said. The question was not about equality and justice but the faith of millions of people. They would not allow women of reproductive age to enter the temple because it would pollute the temple, she said.

More than 30 Hindu organizations and individuals, including the tantric (high priest) of the temple, have appealed to the Supreme Court to review the verdict.

Political observers say India's pro-Hindu Bharatiya Janata Party (BJP) and groups supporting it have been fueling the protests for their political gains.

"The party saw an opportunity to reap political dividends when they saw thousands of Hindu believers rising in protest. The party is trying to rally them behind the party," said Sunnykutty Abraham, a political analyst in state capital Thiruvanthapuram.

Christian groups, which together form some 18 percent of Kerala's 33 million people, have not taken any stand in the dispute.

Father Varghese Vallikkatt, spokesman for the regional bishops' council, said there was no need for the church to intervene. "The Hindus protesting for their faith are enlightened enough to resolve the issue," he told ucanews.com.

However, Hindu leaders like Rahul Easwar believe the top court's verdict sets a precedent for the court to interfere with the faith issues of other religions such as Christianity and Islam.

Easwar told ucanews.com that he and others are organizing people of all religions against judicial intervention in matters of faith.

Easwar, grandson of the temple's late high priest Kandararu Maheswararu and president of the Ayyappa Dharma Sena, one of the protesting groups, said the government was trying to suppress the protest using force.

He was arrested and jailed on Oct. 17 on charges of rioting, unlawful assembly and obstructing the government from discharging its duty.

"We are trying to build a common platform with both Christians and Muslims to resist the Supreme Court verdict. We will talk to leaders of these religions and explore the possibility of joint action," Easwar said before he was arrested.

A Kerala-based Muslim women's rights group, Nisa Progressive Muslim Women's Forum, is gearing up to approach the Supreme Court to demand the entry of women to all mosques across the country.

President V.P. Zuhra said: "Like in Sabarimala, we want the entry of women to all mosques, cutting across denominations and establishing their right to worship."

The judgment has started discussions on gender discrimination and equality in the Catholic Church.

"There is absolute discrimination in the church that women cannot do what men do. Women are endowed with the ability to reproduce and thus they are treated as unclean," said Virginia Saldana, a theologian in Mumbai.

She told ucanews.com that Vatican II had "removed this idea of women as unclean, but still they are not given their due share in the church."

There is a custom among Christian women in India to abstain from entering a church for 40 days after giving birth.

"Though I visited church after my delivery, my parents and seniors strictly asked me not to step inside the church and pollute it. I had to follow them," said Christian activist Philomina Joseph.

In some Catholic churches, nuns and women distribute communion but are not allowed to enter the area of the altar.

According to Holy Spirit nun Sister Lizy Thomas, based in Madhya Pradesh state, the problem rests with the mindset and perception of men, which keeps away women, including nuns, from leadership positions in the church.

"Generally, men tend to treat women as inferior and until and unless it is changed, gender equality is a mirage in the Catholic Church," she said.

Kochurani Abraham, a feminist theologian, said "women are not given adequate access to leadership positions in local, diocese, national and international levels in the Catholic Church."

Astrid Lobo Gajiwala, a women's leader and theologian based in Mumbai, said women in the Catholic Church have been asking for gender equality for ages.

"We do not need the Supreme Court order on Sabarimala to make this happen. We need a new theology and the will of the bishops. They make the laws. They have the power to change them," Gajiwala told ucanews.com

Bishop Gerald Almeida of Jabalpur said: "The Catholic Church is all in favor of the maximum participation of women in all activities of the church except the ordination of women."

The Vatican has appointed women as heads of over a dozen departments and is still trying to enhance female participation in its public offices, the prelate noted.