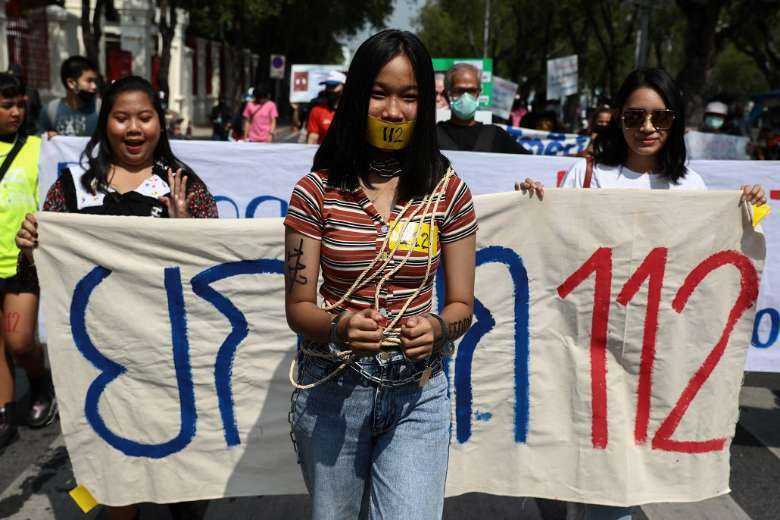 Pro-democracy protesters take part in a march to denounce the use of the lese majeste law in Bangkok on Dec. 10. (Photo: AFP)

A 16-year-old schoolboy is the latest Thai citizen to be accused of committing lese majeste, a crime punishable by law with 15 years in prison, which makes him one of the youngest Thais ever to face such charges.

The teenager was reported to police by a royalist late last week after a picture of the boy appeared online wearing a tank top at a youth-led pro-democracy protest.

His unnamed accuser said the outfit was a dig at King Maha Vajiralongkorn, who has repeatedly been photographed wearing such attire in public over the years.

According to Section 112 of Thailand’s Criminal Code, “whoever defames, insults or threatens the king, the queen, the heir-apparent or the regent shall be punished with imprisonment of three to 15 years.”

Any Thai citizen can file a lese majeste charge against any other and police are required by law to investigate.

The teenager is among at least 24 Thais, including many university students and young rights activists, who have been charged with lese majeste in recent weeks after they voiced criticisms of the monarchy or called for its reform along constitutional lines.

It is the largest number of Thai facing such charges in years, with many of the accused being in their teens, 20s and early 30s, but it is not the first time that a high school student has been facing a charge of lese majeste.

In 2017, a 14-year-old student was accused of insulting the monarchy, but the charge was eventually dropped.

For nearly three years since 2017, Article 112 was not used by Thai authorities, who preferred to charge dissenters with other similarly punitive laws.

The renewed use of the draconian law by authorities to stamp out calls for political reform has been described by rights groups as an alarming development, especially as most of the targets are teenagers, university students and young pro-democracy activists.

The ramping up of lese majeste charges against pro-democracy activists comes after Prime Minister Prayut Chan-o-cha announced on Nov. 20 that the charge of lese majeste would no longer be off limits to young protesters who have continued calling for reform of the monarchy, which they view as a pillar of the current military-allied regime that resulted after a coup in 2014 with Prayut at its head.

“Prayut’s statement represents a sudden U-turn in the Thai government’s policy with regard to the enforcement of Article 112. No legal action has been taken against individuals under Article 112 since July 2017,” the International Federation for Human Rights (FIDH) said.

FIDH has called on the Thai government to “amend Article 112 to bring it into line with Thailand’s human rights obligations under the International Covenant on Civil and Political Rights (ICCPR), to which Thailand is a state party.”

The law, rights groups say, is inconsistent with international law and its use constitutes a severe violation of basic human rights, including the freedoms of speech and conscience.

However, Thai authorities appear set to continue clamping down on dissenting voices by resorting to lese majeste charges against them.

Administrators at a high school in a northern Thai town where students were openly agitating for political reform last week during a politically charged sports day have reportedly been instructed by police to draw up lists of participating students for possible legal action against them.

The students were recorded as they were flashing the number 112 in what appeared to be a dig at the infamous law, which penalizes any dissent regarding the monarchy’s official image as an inviolate and semi-divine institution.

Several leaders of Thailand’s youth-led pro-democracy protest movement have called for Article 112 to be repealed.

“Current legal prosecutions should be dropped and amnesty be granted to all suspects and those already punished compensated, for the sake of democracy and for Thailand to be able to move forward and reduce political conflicts in society,” said Parit Chiwarak, a university student who has been a prominent protest leader and is himself facing lese majeste charges.