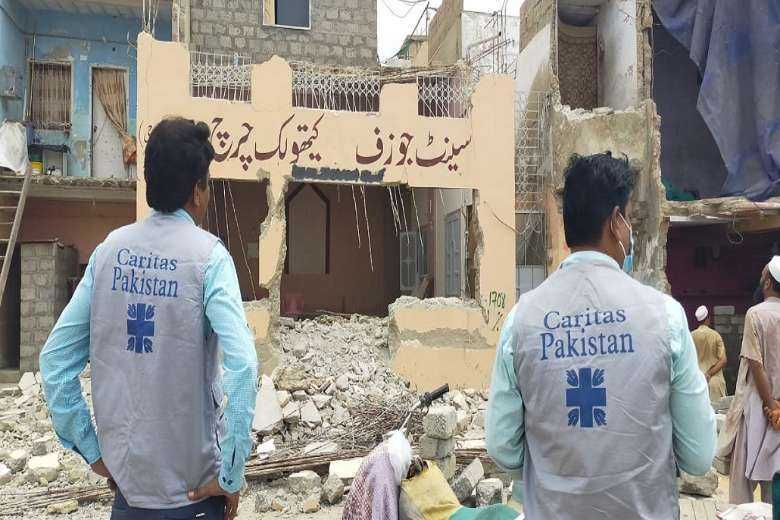 Parishioners in Pakistan's southern port city of Karachi cried when the cross and tabernacle were removed from St. Joseph Church ahead of its demolition on Aug. 24.

“It was a painful experience. They described it as worse than losing their homes,” Father Benjamin Shehzad, former parish priest of St. Joseph, told UCA News.

A few plastic chairs stand amid the piles of debris where the church once stood. A salvaged cross has been placed in a corner. Iron beams sprout out of its torn roof following the government’s anti-encroachment drive near two narrow streams passing through Karachi, locally known as the Gujjar nullah and the Orangi nullah, in the wake of the 2019 flash floods in the capital of the southern Sindh province.

St. Joseph Church had 85 families of parishioners, most of them poor laborers. It is one of three churches standing among the remains of wrecked houses. According to available data, more than 66,500 people have already been affected, with 4,900 houses demolished in Gujjar nullah and 1,700 in Orangi nullah.

The National Disaster Management Authority, Karachi Metropolitan Corporation and the Sindh government plan to construct a wide road on both sides of the two nullahs' banks. The government compensation policy involves handing over 90,000 rupees (US$540) for six months of rent.

In June, the United Nations High Commissioner for Human Rights urged Pakistan to stop evicting 100,000 people living alongside the waterways.

The government should have compensated the people before leveling their settlements

According to Father Shehzad, two more churches have been warned by the authorities.

“The annual flooding was a threat which needed a solution. The government should have compensated the people before leveling their settlements. Most of them lived in properties that had been given a lease of 99 years by the former city district government under the Sindh Katchi Abadis Act 1987. Who will take action against this mafia?” he asked.

“They pulled down half of the building, which is now standing with a single wall. It was in a 24-square-feet area. Now it is shortened after removal of 17 feet. The laborers have asked the local Christians to remove the front wall themselves. They also expressed displeasure,” Amir Robin, national coordinator of monitoring and evaluation at Caritas Pakistan, told UCA News.

“We identified 480 Christian families and their needs in three parishes. Reconstruction is strictly prohibited in these areas. People are using bed sheets to secure their privacy. We can only provide emergency relief assistance including cash support and temporary shelter to the victims residing in thhttps://www.ucanews.com/directory/dioceses/pakistan-lahore/380e ruins of their houses.”

The demolition of St. Joseph Church has sparked nationwide outrage and drawn condemnation from all seven Catholic dioceses.

“It was totally wrong. They should have identified an area for replacement before commencing with the bulldozers. The poor are suffering the most. Mosques and churches have been spared in our diocese during similar operations,” he said.

“We live in a Muslim society where demolition of mosques is considered a major sin. Relocated mosques are built bigger and better. Minority places of worship cannot be wiped out,” he said.

We are saddened and hurt. We request authorities to stop its department and people from desecrating our churches

“We are saddened and hurt. We request authorities to stop its department and people from desecrating our churches,” said Father Yousaf Sohan, vicar general of Multan Diocese.

Father Francis Gulzar, vicar general of Lahore Archdiocese, also condemned the operation. “The house of God should have been spared like mosques,” he said.

Earlier this month, Prime Minister Imran Khan announced the restoration of a Hindu temple which was damaged by a mob in Bhong village in Punjab’s Rahim Yar Khan district.

In 2018, Punjab's government provided land and rebuilt a new mosque to supplement a demolished one to make way for the Orange Line metro project.