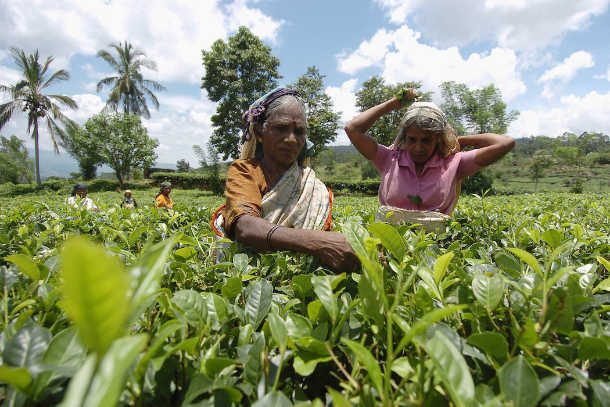 A file image of Sri Lankan tea pickers working on a plantation in Kandy, some 150kms north-east of Colombo. (Photo by Lakruwan Wanniarachchi/AFP)

Tea plantation worker Loganathan Saraswathy, 47, has been fighting for her rights and living in slave-like conditions for years, a common problem in Sri Lanka over a century and a half after the estates were set up.

Saraswathy, who has no land deeds and lives in cramped conditions at an estate in Loolkandura of Kandy district, joined her co-workers in August in marching for their rights to raise awareness of their grievances.

"We don't have a single plot of land that we can call our own," she told ucanews.com. "Due to the low salary we receive, most young people are now eschewing this kind of work and moving to cities to find jobs."

She said she traveled over 100 kilometers from Kandy to Colombo with one of her neighbors on Aug. 21 to attend a large protest rally in the capital.

"My three sons now work in Colombo and my daughter goes to school in Kandy," she said. "I start work plucking tea at 7.30 a.m. and get home around 5 p.m., so the days can be long and challenging."

James Taylor, a Briton credited with introducing the tea industry to Sri Lanka, established the estate on which she works back in 1860.

"I earn about 500 Sri Lankan rupees [US$3] a day if I can pick about 18 kilograms of tea," she said. "If I didn't have this job, I would lose access to this small house and not receive any entitlements at all."

Tea workers were first brought to this island nation from South India about 150 years ago. Many had to live in squalid rooms lacking even the most basic of facilities.

"We work in the face of many difficulties and risks, including landslides, fears of attacks by wild predators like leopards, and the threat of being sexually molested," Saraswathy said.

She said many of the land plots are not offered to the people who work there but sold by the government to developers for higher prices.

If the workers were granted the deeds to the land that, in many cases, has been owned by their families for generations, they would be able to grow crops, raise livestock and earn a more handsome income rather than surviving on a subsistence wage. The People's Alliance for Right to Land holds a protest in Colombo on Aug. 21 to expose people's ongoing struggle to claim their land. (Photo by Niranjani Roland/ucanews.com)

Jeyachithra Tharmalingam has also joined demonstrations urging the government to respect the basic rights of agricultural workers. The military continues to occupy much of the land that belongs to the Tamils due to national security fears nearly a decade after the civil war ended.

After the armed forces squashed the last remnants of resistance to cap a 26-year civil war with the Liberation Tigers of Tamil Eelam (LTTE) in 2009, large tracks of land inhabited by Tamil communities in the northern and eastern parts of the country were reportedly seized.

"There are 22 camps in Myliddy [a small town in Northern Province] and around 2,000 families live there. Many of us suffer due to land rights abuses and resettlement issues," said Tharmalingam. "We need our land back. Our identity, livelihoods and future depend on this."

Soldiers still live in Myliddy and grow coconut trees there, she said. In contrast, regular laborers have no choice but to scrape a living from menial work on the plantations, she added.

However, President Maithripala Sirisena said recently that as much as 88 percent of the land occupied by the military during the post-war period in Northern Province has since been released to its original owners.

He promised on Aug. 22 that by early September it would all be handed back. The president made the vow during the opening ceremony for a reconstructed harbor for fishing trawlers in Myliddy.

The People's Alliance for Right to Land (PARL), a network of land rights activists, has since organized a series of public meetings and protests to raise the issue of land rights for tea workers and war-affected Tamils.

Herman Kumara, a senior figure at PARL who also serves as director of the National Fishery Solidarity Movement, said the government should guarantee the rights of estate workers and internally displaced people are respected.

"Those who work on plantations are from marginalized communities. They don't own anything — no proper housing, land deeds or toilet facilities — even though they have been living in the same rooms and estates for generations," said Kumara.

The tea workers live on the estate in rows of 400-square-foot rooms. However, the government has started selling off the land to shut down some of the tea-cultivating operations, thus robbing the workers of their livelihoods and the land where their families have lived for generations.

"They should be providing [a reasonable measure] of land for housing and home gardening. Abandoned land should be distributed among young people who lack jobs in the plantation sector," he said.

Kumara said many tea workers have either lost their land or otherwise been negatively affected by the government's development programs including the Uma Oya project and other tourism projects in recent years.

Uma Oya is a multipurpose development project that critics have blasted for wreaking unacceptable levels of environmental destruction, with hundreds of wells having dried out and thousands of acres of agricultural land becoming unusable due to all the drilling and tunneling involved.