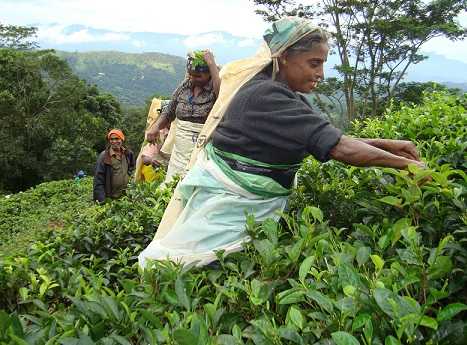 Over one million tea workers have no voting or land rights.

More than 100 landless tea estate workers rallied yesterday and accused the president of reneging on a pledge to provide land and housing for them.

Plantation land that is not being utilized is either being sold off to businessmen or being set aside for unemployed Sinhalese youths, they said during the protest in Deltota near Kandy.

Setting out his vision for the future in a 2007 book titled Mahinda Chintana, President Mahinda Rajapaksa said: “One of my major goals is to make the plantation community a house owning society.”

Six years on, the tea workers are still waiting.

“Families have lived in the same cramped housing for over 75 years and are being evicted to make way for businessmen buying up land even though these people have brought in billions of dollars for this country,” said Buddhist monk Venerable Meegahapandure Punya Rathana Thero.

The workers are almost all Tamils descended from people brought to Sri Lanka from India by the British in the 1820s to provide cheap labor on the estates. Around 52 percent of the workers are women.

Over one million workers today have no voting or land rights, no national identity cards and no birth certificates.

“Millions of dollars have been pocketed through their hard labor by greedy plantation owners and politicians,” said Linus Jayatilake, convener of Movement for Plantation Peoples’ Land Rights.

Now the government just plans to give land away and overlook those who really deserve it, he said.

He urged the government to re-think its policy and grant the tea workers lands in its 2014 budget, which will be announced in November.