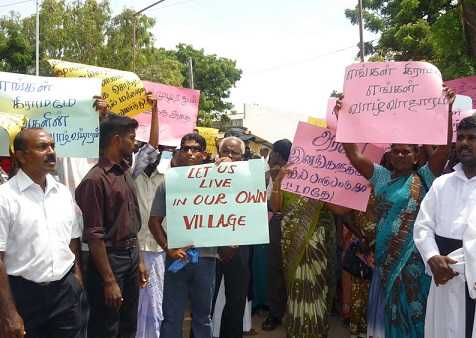 Several years ago the Sri Lankan government emerged victorious after crushing Tamil Tiger rebels fighting for an independent homeland. Now a new battle is looming, this time in the courts over homes and land.

Thousands of Tamils were displaced during the 30-year civil war. Some people fled to neighboring countries while others relocated to other parts of Sri Lanka.

Since the war ended in 2009 people have been returning, seeking to reclaim their property.

However, the government and the military have other ideas, saying earlier this year that large tracts of land that were acquired and set up as “high security zones,” would become permanent.

The government says it wants to keep hold of more than 6,000 hectares.

Julius Selvamalar is one of many people in the north of the country who has filed cases against the government and the military.

“Six years ago, we fled our land because of heavy fighting. It has since been cordoned off by the military which is refusing to let my family return,” said the mother of two children.

“The military has occupied our land and we are living in temporary shelters.”

Thousands of land owners in and around Jaffna are turning to the courts to reverse or prevent government land seizures, which in many cases includes their homes.

Last month a class action suit was filed against the military over forced land seizures to build military offices.

Selvamalar said her husband was abducted in 2009 so now she was struggling to send her children to school without a regular income.

“Today I have neither husband nor land,” she said. “Where can we go now?”

About 2,800 hectares of land has been seized on the Jaffna peninsula so far and the government intends to take much more, according to one Tamil lawmaker.

“Over 2,000 people have filed cases in different courts to try and regain land they have lived on for generations,” said Saravana Pavan, an MP from the Tamil National Alliance (TNA) Party. “Our only hope now lies with the courts.”

The TNA has provided legal assistance for 2,127 people and we estimate there are at least another 3,000 in the same position, according to Pavan's figures.

"It’s not just a question of their homes being lost. The seizures also affect livelihoods, especially for farmers and fishermen," he said.

A large proportion of the active labor force in Jaffna depends on agriculture rather than industry for employment and many women are involved in farming.

However, the government strongly denies taking land from rightful owners.

“The government has decided to acquire 6,381 hectares in Jaffna that is now being used as high security zones permanently and owners will be paid compensation,” Minister of Land and Land Development Janaka Bandara Tennakoon has said.

The government claims to have set aside Rs400 million (US$3.1 million) to be distributed for compensation to those whose ownership is confirmed.

But Saroja Sivachandran, a director of the Center for Women and Development in Jaffna, said the government needs to be helping people in other ways.

“Keep land in the hands of local communities and implement genuine agrarian reform for natural resources, as it is important to support agro-ecological peasants, small-old farms and fishing industries,” she said.