Church and lawmakers discuss the plight of religious and racial minorities in Sri Lanka at an event organized by the Sri Lankan Movement for Truth, Justice and Reconciliation. (ucanews.com photo)

Tamils have long been excluded from Sri Lanka's political processes and they can no longer be treated as second-class citizens, said a parliamentarian at an event May 27 attended by church officials and lawmakers.

M.A. Sumanthiran, lawmaker and spokesman for the Tamil National Alliance, explained a history of Tamil grievances, at an event organized by the Sri Lankan Movement for Truth, Justice and Reconciliation.

"Everything was ruled out by simple majority rule in parliament. From the beginning, in 1949 the Indian Tamils who worked in up-country plantations lost their citizen's rights by the Citizens Act," said Sumanthiran, at the event held at Caritas Sri Lanka in Colombo.

"The reason why Tamil youths took up armed struggle, was because they lost all hope brought about by [Sinhalese] majority rule," he said in reference to the country's civil war period 1983 — 2009 which killed an estimated 100,000 people

"In 1956, they were deprived of their language rights when Sinhala was made the state language," Sumanthiran explained.

Sri Lankan Tamils became further disillusioned when they were not allowed to take part in drafting the republican constitutions of 1972 and 1978.

At a later stage, Tamil was also made an official language, Sumanthiran said, but much work needs to be done in what he describes is still an intolerant culture.

"Even after 30 years, a resident in the North and East provinces cannot make a complaint in their police stations using their own language, Tamil," he said.

"How can police investigate crimes if they do not understand Tamil? This is the crux of the problem. We need to live peacefully with the majority race, with equal status not as second-class citizens.

"Minorities are victims of this intolerant culture prevailing in Sri Lanka, directly or indirectly," Sumanthiran said. 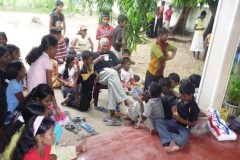 "It is our hope to unite under one Sri Lankan identity while seeking justice for all citizens," he added.