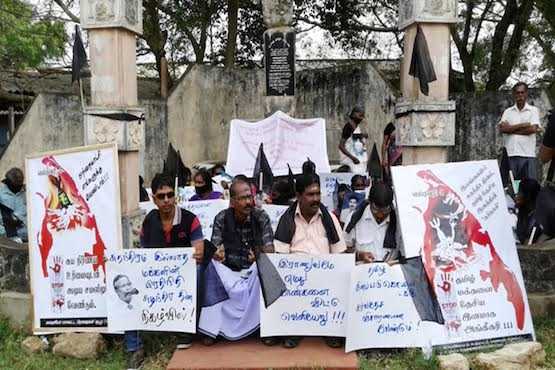 Members of the Tamil community and rights activists held protests in several areas on Sri Lanka's Independence Day, Feb. 4. Above are participants at one protest in Vavuniya. (Photo courtesy of Vavuniya citizen's committee)

Relatives of people who disappeared during Sri Lanka's civil war can't celebrate the country's Independence Day in freedom, was the message echoed at protests held in Tamil majority areas on Feb. 4.

Tamils have little reason to celebrate the 68th anniversary of Sri Lanka's independence from Britain in 1948, said Father Emmanuel Sebamalai, president of the Citizen Committee of Mannar.

They instead call it a "black day."

"Tamils who lost their loved ones by disappearance, abduction and unlawful detention have suffered for years becuse they do not know the fate of the victims," Father Sebamalai said at one of the protests.

In 1983, the Sri Lankan government became embroiled in a brutal civil war against the Liberation Tigers of Tamil Eelam, an insurgent group that fought to carve out a separate Tamil homeland in the country's North and East until the group was defeated by government forces in 2009.

About 40,000 civilians died during the final days of the war. It was a period that saw unlawful killings, disappearances, arbitrary arrests and torture from both sides.

There are still over 50,000 internally displaced Tamils in former war torn areas. Some of them have had no home in over two decades.

"Resettlement has still not been completed even though the war is over," Father Sebamalai said.

"In such a situation Tamils are not in a position to celebrate Independence Day in freedom," he said.

The priest said that the protestors have sent Sri Lankan President Maithripala Sirisena a petition describing the plight of the Tamils.

Nagenthiran Jeyalakshmi's son disappeared in 2008 and she is still looking for answers.

"My son went with his friend to make an enquiry at the Trincomalee navy office and was abducted," Jeyalakshmi said at one of the protests.

"He didn't have any connection with any armed group," said the 52-year-old. "But still I don't know about my son's fate."

The Sri Lankan government has promised the international community it will bring justice for the families of those who disappeared.