State with India's worst record on violence battles to improve it 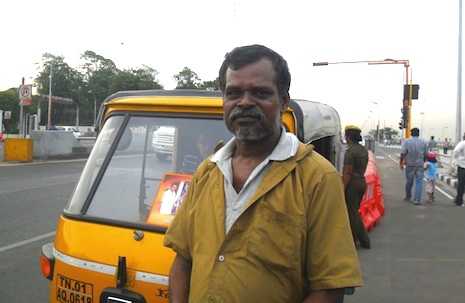 Murugan with his three-wheeled taxi in Chennai

Murugan hits his wife when he’s drunk. The three-wheel taxi driver says she must be taught obedience. Asked if she would ever retaliate, he says laughingly: “Have you ever seen a woman hit a man? Her reputation would be ruined.”

She might not hit him back, but at least three times a month she drags her inebriated husband, aged 43, to the police station nearest their home when he refuses to stop hitting her.

There he sleeps off the alcohol, and in the morning his wife pays a discreet fine to the constables so she can have Murugan home for his breakfast.

“We had a love marriage,” says Murugan, distinguishing his from the Indian marriages "arranged" by the couple’s parents.

“We are happy together; I bring her back a small bottle of liquor every night. She has a hard day working as a maid, and I have a hard time driving my auto-rickshaw around this hot city. Our bodies ache and we drink so we can fall asleep.”

Traffic snarls make driving a nightmare in Chennai, city of five million people and the capital of Tamil Nadu state that is noted for its humid climate.

The state has the dubious distinction of having the highest incidence of domestic violence in the country. According to the National Crime Records Bureau, 84 percent of all domestic violence (DV) complaints in India in 2012 were made in this state.

In 2013, the country’s then Women and Child Development Minister Krishna Tirath said that 3,983 reported cases put Tamil Nadu right on top of the country’s DV-affected states.

Psychiatrist Mohan Raj sees no correlation between the state's US$3.5 billion in alcohol sales and its high rate of DV reporting.

“Alcohol is only one of the factors that contribute to an abuser’s actions,” he says. “Abusiveness is a personality trait and is perpetrated by a controlling personality with low empathy skills. Sometimes, it is a learned behavior.”

The large numbers reported, he says, are a factor of successful awareness campaigns and ease of reporting. Other states may have many more cases that go unreported, he says.

The high numbers also does not mean that all cases are reported, according to Chennai’s Directorate of Social Welfare.

“We would rather have more incidents reported than less. Many cases go unrecorded because the victim’s parents regard exposure as a blot on their honor,” Xavier Chrisso Nayagam, the commissioner of the directorate told ucanews.com.

Chrisso Nayagam is emphatic that the numbers are no reflection on the personality of the state’s residents. He cites the Tamil concept of thaaikulam, a metaphor for womankind, when he says women in Tamil Nadu are treated with a respect close to veneration.

Literally, the phrase refers to all women as a community of mothers who must be honored.

“We have accessible portals for reporting and we ceaselessly create awareness of DV,” he says.

“The prime role of a protection officer is reconciliation,” says the directorate’s spokesperson. “When that fails, the officer has a statutory role to file a Domestic Incident Report at the magistrate’s court.”

Since 2005, some 23,781 DV cases have been reported by protection officers in the state.

Apart from protection officers, 98 service providers are currently authorized to report incidents. They include the Young Women’s Christian Association in Chennai, NGOs and voluntary organizations.

The first port of call for victims of domestic violence is typically the nearest police station. To encourage women intimidated by gender-neutral police stations, Tamil Nadu now has 198 All-Women Police Stations, more than any other state in the country.

For Murugan’s wife, none of these portals are an option because she chooses not to have the father of her two children punished, but merely leashed.

The neighborhood police station lets her leave Murugan with them on difficult nights, without lodging a complaint. “It happens two or three times a month,” says Murugan without rancor.

“I have never left him, or threatened to run to my mother,” she says. “When men drink, they don’t know what they are doing. But now that my son has grown up, he stops his father from hitting me when he is at home.”

Why does he hit her? “I don’t know,” she smiles. “It’s when I talk to someone he does not like. Or I might forget something he asked me to do.”

Would she ever retaliate? “How can I? He is my husband. And sometimes, he is better than most.” 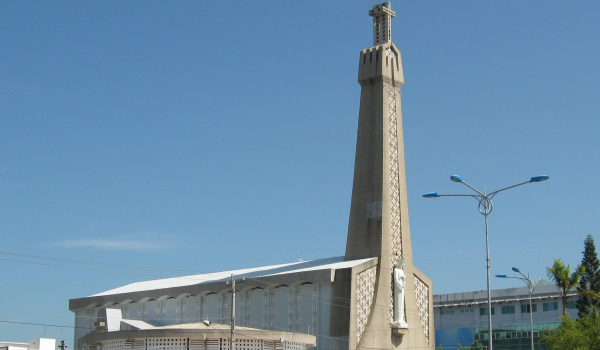 Chilaw is a coastal area in the northwestern province of Sri Lanka, about spanning a land area of about 3,013.4 square