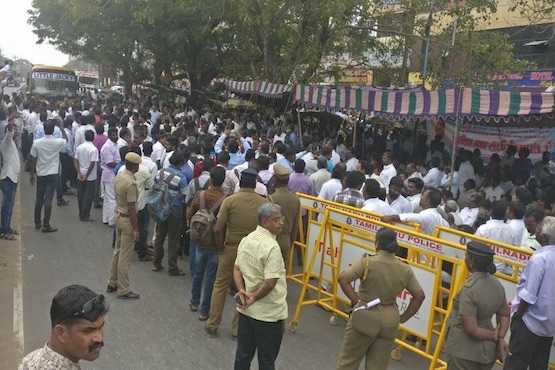 Christians protest on Jan. 22 to demand a fair investigation into the death of a pastor who was found hanging in Tamil Nadu's Kanchipuram district. They suspect high-caste Hindus murdered the pastor. (Photo supplied)

About 2,000 Christians blocked a busy road in India's southern Tamil Nadu state on Jan. 22 demanding the arrest of four people they suspect were behind the death of a Christian pastor who was found hanging inside his home.

Pastor Gideon Periyaswamy, 43, who led an independent church in Adayachery village in Kanchipuram district, was found hanging from a rope on Jan. 20, a week after he complained to police of harassment from high-caste Hindus in his area.

Police inspector Amal Raj told ucanews.com that "prima facie it appears to be a case of suicide but we are looking at all possible angles."

The unmarried pastor lived inside a one-room house close to the church. Women members of his church who came to clean the premises saw his door bolted from outside. They opened it and saw his body hanging.

Local Christian leaders including Pastor Immanuel Prabhakaran, who worked with the deceased pastor, told ucanews.com that the pastor faced stiff opposition from the high-caste Vanniyar group in the area.

They wanted the pastor to stop his mission activities involving lower-caste people, which they claimed polluted their area, Pastor Prabhakaran said.

"Not a single Sunday service in the past six months passed off peacefully without disturbance," he said.

Lawyer Gini Immanuel, who helped Pastor Periyaswamy file complaints, told ucanews.com that the pastor had faced a series of problems.

"Once the church water supply was cut and the church's roof was demolished. I intervened in the matter and represented the issue to the district authorities," Immanuel said.

Christians have been protesting on a road in front of Chengalpattu government hospital, where the pastor's body is being kept pending a mandatory post mortem to ascertain the cause of death.

Protesters are demanding police arrest four people, including village leaders, about whom Pastor Periyaswamy complained several times. The last complaint was made on Jan. 14.

They want a private doctor to join the team of medical experts conducting the post mortem, which they want to be videotaped in the presence of a judicial magistrate.

Reverend Joel Sekar of the Synod of Pentecostal Churches said Christians will continue the protest until arrests are made.

He said Christians are only seeking ways to ensure a fair post mortem and guarantee an impartial investigation.

Amos Paul, a friend of the deceased pastor, told ucanews.com that police are reluctant to arrest the suspects because they fear a sectarian backlash. "They say if the four are arrested, 10,000 will come out on the streets and there will be communal violence," he said.